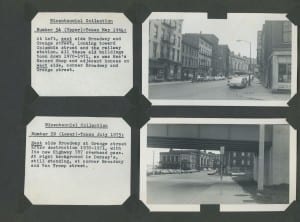 Albany Public Library joined New York Heritage, a statewide digital library, in the spring of 2014 to raise awareness of its collections. The library’s Pruyn Collection of Albany History is a treasure trove of information about the leaders, citizens, buildings, governments, events, and history of New York’s capital city. The collection includes documents about urban renewal, the South Mall construction, city and state government, and African American history. 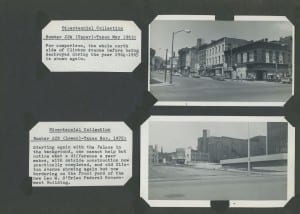 The unique item we are highlighting in this post is a photo album documenting the effects of urban renewal on the Clinton Square neighborhood of Albany. The album was handmade by Florence L. Powell, a Historical Research Assistant for the City of Albany, in 1976. Urban renewal is a blanket term for programs, largely initiated by the Federal government, which demolished and rebuilt large sections of America’s urban environments.  Highways, office buildings, parking structures, and civic centers often replaced historic buildings, low-rise housing, and private businesses. In Albany, the construction of Interstate 787 is the most visible and lasting evidence of urban renewal. The commensurate destruction of older buildings and reshaping of streets is documented in Powell’s work.

In the mid-1960s, Powell was a resident of the Clinton Square neighborhood of Albany, the area where North Pearl Street and Broadway meet Clinton Avenue. By 1963, demolition of buildings had begun as part of the urban renewal projects initiated across America by the federal government. Powell said she felt that, “one of these days there would be those who would want to know what the old area had looked like, and that there should be a permanent record of the area.” With this impetus, she “began in leisure moments and at weekends” to take photographs of the streets and buildings in the Clinton Square neighborhood. 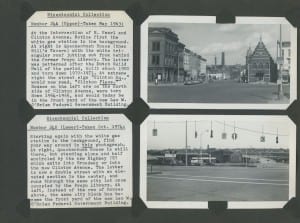 In 1975, Powell covered the same ground with her camera and her dog, a collie named “Blackie,” and took photographs of the same locations- where those locations still existed. The effects of the urban renewal projects in Albany, which changed the character of neighborhoods, are shown in the side-by-side images of Powell’s album. At the urging of future NYS Assemblyman Jack McEneny, Powell assembled the pictures into an album and distributed five copies. One of those albums now resides in Albany Public Library’s Pruyn Collection of Albany History and online at NY Heritage.

For any researcher or layperson seeking to understand the effects of urban renewal on a neighborhood, Powell’s album is a must. And as Powell notes, “Besides being historically interesting, the whole project has been a most pleasant pursuit for me, and of course for my collie, ‘Blackie,’ who was my guard in isolated places making the entire project possible.” We hope your time on Albany Public Library’s NY Heritage Collections is a pursuit as eye-opening as Powell’s.