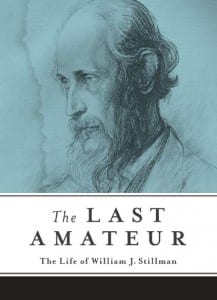 In a new biography being released in October by SUNY Press, The Last Amateur: The Life of William J. Stillman, author Stephen L. Dyson tells the story of William J. Stillman (1828–1901), a nineteenth-century polymath. Born and raised in Schenectady, NY, Stillman attended Union College and began his career as a Hudson River School painter after an apprenticeship with Frederic Edwin Church.

In the 1850s, he was editor of The Crayon, the most important journal of art criticism in antebellum America. Later, after a stint as an explorer-promoter of the Adirondacks, he became the American consul in Rome during the Civil War. When his diplomatic career brought him to Crete, he developed an interest in archaeology and later produced photographs of the Acropolis, for which he is best known today.

In yet another career switch, Stillman became a journalist, serving as a correspondent for The Times of London in Rome and the Balkans. In 1871, he married his second wife, Marie Spartali, a Pre-Raphaelite painter, and continued to write about history and art until his death. One of the later products of the American Enlightenment, he lived a life that intersected with many strands of American and European culture. Stillman can indeed be called “the last amateur.”

Stephen L. Dyson is Park Professor of Classics at the University at Buffalo, State University of New York. He is the author of several books, including Rome: A Living Portrait of an Ancient City.