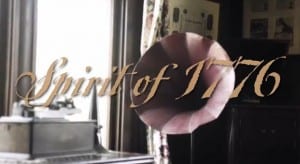 The Heritage Museum of Orange County in Santa Ana, CA provided the stage set for a new music video, “Spirit of 1776,” which the production team calls a “suffragette anthem”, scheduled for release in time for Women’s Equality Day celebrations.

Observed on August 26th each year, the occasion commemorates American women’s campaigns to win the vote from 1848 to 1920. The music video is inspired by an actual suffrage campaign wagon called the “Spirit of 1776” used in New York State as a speakers’ platform and in suffrage parades prior to 1920.

The U.S. Congress designated August 26th as Women’s Equality Day in 1971 through the work of Rep. Bella Abzug (D-NY) to commemorate the 1920 passage of the 19th Amendment to the U.S. Constitution that extended the vote to American women.

“We’re recognizing the efforts of our ancestors by creating an anthem for women everywhere to learn and sing together,” said Eighty Bug, the performer and songwriter who composed and arranged the video’s lyrics and music. Her musical career has included performances in a variety of styles, including pop, hip hop, soul, R&B, rock, country, electronica, down tempo, and dance music. She continued: “Just as Americans fought for freedom from tyranny in 1776 and suffrage activists organized for equality starting in 1848 at Seneca Falls, NY, we must continue to support our sisters today in the Middle East, India, Africa, Asia, Europe, North and South America, as well as throughout the world.”

The music video pays tribute to suffragists like Edna Kearns who hitched a horse to the “Spirit of 1776” wagon in 1913 for suffrage organizing. Her work symbolizes the combined efforts of tens of thousands of activists across the nation who over a 72-year period participated in the U.S. women’s suffrage movement. They worked in local and state campaigns as well as in the final push to win passage and ratification of the 19thAmendment to the U.S. Constitution.

The United States will celebrate its national centennial of women voting in 2020. At that time more people than ever will be aware of the context of the international suffrage movement following the anticipated release in January 2015 of “Suffragette,” the major motion picture from the UK directed by Sarah Gavron, written by Abi Morgan, and starring Meryl Streep and Carey Mulligan.

The lyrics of the music video refer to how American women set aside their struggle for the vote during the Civil War in the U.S. and resumed campaigning with an intensified effort after the turn of the 20th century in communities large and small across the nation. American suffrage movement activists used the theme of the “Spirit of 1776” in policy proclamations, speeches, writings, leaflets, and performance art.

The music video makes the link between young people of today and the work of young activists 100 years ago. There’s a parallel between the persistence and optimism of both generations, and the musical production stresses the urgent need today to continue the unfinished social revolution for equality and social justice. “With the ‘Spirit of 1776’ music video, we hope to share the love, strength and enlightenment of the suffrage movement with the rest of the world. We’ve performed this song with love for all those who must continue to fight to be free,” Eighty Bug added.

Staff members Jamie Sue Hiber and Adam England at the Heritage Museum of Orange County in Santa Ana, California coordinated the museum’s resources and staff with the video’s production team. “Although American women are no longer organizing for the vote, the video’s underlying message of unfinished work remains as important today as it was in the past. It is such an honor for us to be involved in this project,” said Jamie Sue Hiber, the museum’s events coordinator.

The women united to free every man

Each voice should be heard but only could half

To be free to speak to choose and to laugh

So they stood once again, every misses and girl

They filled up the wagon with banners unfurled

They paved the way bold for each gal to come

To be treated as one, be you daughter or son

It’s the spirit of freedom that we still fight for

Load up the wagon with signs high on sticks

Come along for the Spirit of Seventeen Seventy Six

After houses were cleaned and the children attended

After dinner was served and the torn things were mended

Without wanting or waiver they gathered together

Suffragette-ing in all kinds of weather.