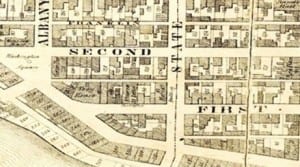 The Rensselaer County Historical Society (RCHS) will debut a new exhibit, At the Corner of Second & State: Where Troy’s History Intersects, on Monday, September 8th at 7 pm along with the companion exhibit, “Conserving the Welfare and Best Interests of our Depositors”: The Troy Savings Bank.

At the Corner of Second & State will be displayed in the main exhibit area of RCHS, the Grimm Gallery. As a key location in Troy’s original grid pattern, laid out on Jacob Vanderheyden’s farm in 1781, the four corners that make up the intersection of Second and State Streets, and the surrounding blocks, witnessed many important events and developments over the years.

Four key themes will be explored in this new exhibit:

• Architecture – Highlighting the Troy Savings Bank Music Hall (1875), the Caldwell Apartment Building (c. 1907) and the residential and commercial structures that still exist in the historic district.

• Cultural History – Examining the rich history of cultural performances and schools found nearby this major intersection, such as the Troy Conservatory of Music and the Troy School of Arts and Crafts.

• Social Action – The buildings centered around this intersection were home to several key social movements including the Suffrage/Anti-Suffrage movements of the early 20th century and Underground Railroad activity such as the rescue of Charles Nalle.

Utilizing the archival collections at RCHS, the exhibit will feature historic photographs and objects. Highlighted items include: Architectural Plans of key buildings, such as the YWA building; Votes for Women banner c. 1915; Seat from the Troy Savings Bank Music Hall; Art pieces from the Troy School of Arts and Crafts; Photographs of parades, group portraits taken on the steps of the Music Hall and more.

The exhibit will open at the RCHS 87th Annual Meeting on Monday, September 8, 2014 and remain on view for 15 weeks, including during the annual RCHS Holiday Greens Show to close on December 20, 2014.

The companion exhibit, “Conserving the Welfare and Best Interests of our Depositors”: The Troy Savings Bank, focusing on the history and impact of the Savings Bank, will be curated and shown in the Robison Meeting room. This exhibit will run through November 15, 2014.

Special gallery talks and other programs will be presented to accompany the main exhibit– check the RCHS website as details become available.

RCHS is open Thursdays – Saturdays, Noon to 5pm. There is no fee to view the exhibit, although donations are encouraged. Guided tours of the exhibit will be available for groups. For more information, call 518-272-7232 or visit www.rchsonline.org

Map detail from the 1858 Atlas of Troy (provided).