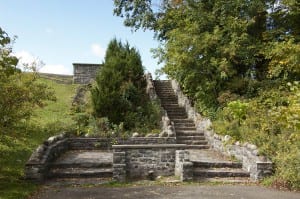 In the early 20th century, Frederick Law Olmsted, Jr. (1870-1957) and Thomas R. Proctor (1844-1920) led the way in the transformation of the Utica landscape, creating beautiful and naturalistic recreational spaces that provided escapes from the city and enhanced the quality of life for its inhabitants.

“A Century of Olmsted: Utica and Beyond,” on view August 14 through January 4 at the Munson-Williams-Proctor Arts Institute, is the first exhibition to explore the creation of some of Utica’s most beautiful natural places.

During the late 19th century, American cities—stifled by their inherent industrial landscapes and high population density—incorporated park systems to provide pastoral and woodland escapes for the public’s enjoyment. The Utica parks and Parkway neighborhood stemmed from this national trend. Proctor—a prominent citizen, businessman, philanthropist, and one of the Institute’s founders—believed that the city deserved parks comparable to those in nearby urban centers. His vision manifested itself in the City of Utica’s beautification efforts directed by Frederick Law Olmsted Jr., the son of America’s most celebrated landscape architect, Frederick Law Olmsted Sr. (1822-1903). 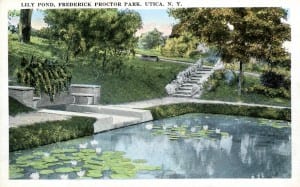 As noted by guest curator Amanda Manahan, who wrote her Master’s thesis on the Utica parks, Utica has benefited from this series of expansive and unique parks for more than 100 years. Through period imagery and contemporary art photographs, this exhibition will explore the development of the park system (concentrating on Roscoe Conkling and F. T. Proctor Parks), the changes to the landscape over time, and the recent restoration efforts.

Contemporary photographs by artist Lee Friedlander will also accompany the exhibition. Drawn from Friedlander’s book Lee Friedlander Photographs: Frederick Law Olmsted Landscapes, the images chronicle the dramatic impact of the vision of Olmsted Sr. and how his foresight influenced his son and the parks of New York State.

Visitors are invited to celebrate Utica’s Parks at the Opening Reception for A Century of Olmsted: Utica and Beyond on Thursday, August 14, from 5 to 7 p.m at the Museum of Art, Fountain Elms; there will be brief remarks in the exhibition gallery at 5:30 p.m. The event is free and open to the public.

In the early twentieth century, the Proctor family and the Utica Improvement Board contacted the Olmsted Brothers Landscape Architecture firm to design green spaces in Utica. In this walking tour, Amanda Manahan and Katechen Cardamone discuss how Frederick T. Proctor Park, the “crown jewel” of the Utica parks, demonstrates a balance of aesthetics, naturalism, and functionality and how the landscape has evolved to reflect changes in society’s sense of aesthetics, function, and purpose. The tour will also highlight the continuing work of the Central New York Conservancy to restore and preserve this historic treasure.