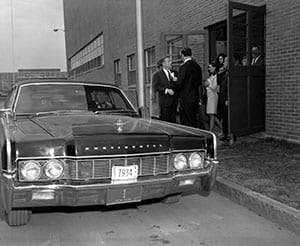 The 1932 Packard Phaeton was purchased in 1932 by Governor Franklin D. Roosevelt for his use in Albany. When Roosevelt was elected to the Presidency, the vehicle became part of the state fleet. Though kept in running condition, it was rarely used after 1942 when Governor Thomas Dewey acquired a Cadillac. In 1982, Governor Hugh Carey transported Queen Beatrix and Prince Claus of the Netherlands in the Packard when they visited Albany. 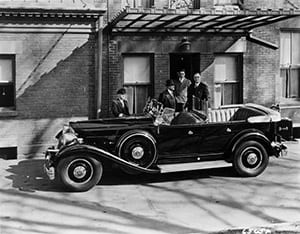 The 1967 Lincoln Executive Limousine was placed into service for Governor Nelson A. Rockefeller on March 6, 1967. Rockefeller privately purchased an identical vehicle for his use while in New York City. Its amenities included air conditioning, radio, cassette player and television receiver, as well as a sliding window for privacy. The car was used by succeeding governors until 1988.

The State Museum is a program of the New York State Education Department’s Office of Cultural Education. Located on Madison Avenue in Albany, the Museum is open Tuesday through Sunday from 9:30 a.m. to 5 p.m.  It is closed on Thanksgiving, Christmas and New Year’s Day. Admission is free. Further information about programs and events can be obtained by calling (518) 474-5877 or visiting the Museum website at www.nysm.nysed.gov.