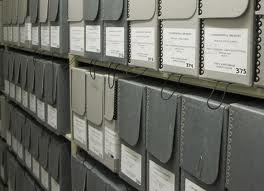 The New York State Archivist has announced that the State’s Archives Documentary Heritage Program’s (DHP) regional archival services are being consolidated in a move that critics say will diminish the effectiveness of the popular historical records program.

In a message sent in May, New York State Archivist Christine Ward announced the changes, which eliminated the DHP’s regional administrators at the end of June and will replace them with a single, statewide administrator under a five-year contract.

The change affects only the program’s regional advisory services, she said. The DHP competitive grants program, administered by the central state archives office, is not expected to change, and parts of the New York State Library’s Conservation/Preservation Program are expected to be included in the new statewide contract. A move that State Archivist Ward says will actually increase services.

The consolidation of the advisory role of the DHP shuts out nine regional service providers – seven 3R library councils, the Museum Association of New York, and the Greater Hudson Heritage Network. “Our aim is to move the DHP in a direction that will bring the best quality and most comprehensive services to New York’s historical records community with the resources available to us,” Ward said in a statement to providers.

One critic of the move, a veteran, now former, DHP Regional Archivist who spoke with The New York History Blog, but asked to remain anonymous, said the elimination of regional services will “dramatically impact the future of the ways in which regional advisory services are provided to smaller repositories with documentary collections.” 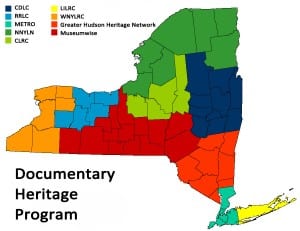 New York’s Documentary Heritage Program was established in 1988 by the state legislature, encouraged by the efforts of then State Archivist Larry Hackman, as a way to respond to statewide concerns that local organizations were struggling to preserve their archival collections. Three regional field offices were established, each with a professional archivist who would assist local organizations in building skills and other resources necessary to carry out their work. The field services included on-site consultation visits and reports and developing workshop trainings and other professional development tools. Regional archivists also helped carry out advocacy work on behalf of local history and its custodians and helped build regional archivists networks.

According to the former Regional Archivist who spoke with The New York History Blog, lack of funding by the state legislature reduced the three full-time positions to the current nine regions providing part-time services in 1994.

“The 1994 budget has been the financial base ever since,” the former archivist said, “and actually diminished as the State Archives took funds from the base to set up a separate competitive grant program.”  Funds were also “swept” in several budget years, the source said, so that the program is now operating with about $200,000 statewide.

Responding to a request for information about the cuts, State Archivist Ward concurred that one of the biggest problems has been funding.  “While costs/expenses of doing business generally have increased considerably since the DHP was founded in 1990, there has been no increase in the funding available for the program,” she said in an e-mail.

“Supporting the program in its current configuration and funding level has been exceptionally challenging, as our current regional providers have repeatedly stated,” she added. “We are seeking responses to the RFP that propose productive, innovative ways to meet the goals of the DHP as effectively as possible within the current funding capacity.”  Ward said that “during periods of fiscal constraint” the $500,000 allotted for the DHP (for both the advisory services and the grants) was reduced to $462,000.

Ward said technological advances will allow consolidation of the DHP advisory services. “Any future service model will be expected to provide training and technical services in all regions of the state and deliver those services in ways that make it accessible for a range of constituents,” she said. “We expect that face-to-face training will continue to be delivered in the regions. We also expect that there will be increased use of web-based training, which will help reduce travel costs and reach a greater number of people.”

The former Regional Archivist who spoke with The New York History Blog says that administrators have not done enough to demonstrate the DHP’s effectiveness and push for its support.  “The regional service providers have supported the program with both dollars, personnel and other resources and have made repeated attempts over the years to get the State Archives to increase aide for the program through the funding source: the Local Government Records Management Improvement Fund, with no success,” the former regional archivist said. “The DHP has never been directly promoted at the state level to the Board of Regents, the State Historical Records Advisory Board, nor the State Legislature – I’m not even sure any of them know we exist!”

For her part, State Archivist Christine Ward, says: “Discussions about the challenges for the DHP and its future have taken place regularly over the past several years with the current service providers, the State Historical Records Advisory Board, and our administration.”

“Once a full array of DHP services resumes with the new statewide contract,” she said, “it is a requirement of the contract that every region have access to high quality, comprehensive services.”

Until then, she said the State Archives is planning to provide “basic support to the historical records community through email and phone communications and delivery of on-line resources.”