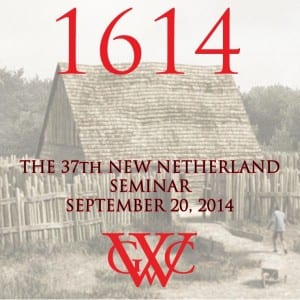 The New Netherland Institute and New Netherland Research Center have announced “1614,” the 37th New Netherland Seminar, which will take place on September 20th at the Carole F. Huxley Theater in the Cultural Education Center in Albany.

The seminar will commemorate the 400th anniversary of the construction of Fort Nassau—the first documented European settlement in New York state—on present-day Castle Island in the port of Albany. The seminar speakers and topics are listed below. For registration and additional details, visit the website of the New Netherland Institute.

Born and raised in upstate New York, Tantillo is a graduate of the Rhode Island School of Design. Over his career, his focus has shifted from architectural design to visual representation, ultimately leaving commercial art in 1984 for the full-time pursuit of fine art. He has spent the last 25 years creating numerous historical and marine paintings, many of which depict scenes in Neww Netherland. He is the author of The Edge of New Netherland, an illustrated exploration of New Netherland’s South River. His work is currently on display at the Fenimore Art Museum in Cooperstown, New York.

A longtime student of the Iroquoian and Algonquian peoples of eastern North America, Starna is the recipient of a Senior Fellowship at the Nelson A. Rockefeller Institute of Government and the Donald M. Blinken Fellowship in Academic Administration at SUNY. He is the author of From Homeland to New Land: A History of the Mahican Indians, 1600–1830 and co-editor—with Charles Gehring­­— of A Journey into Mohawk and Oneida Country, 1634–1635: The Journal of Harmen Meyndertsz van den Bogaert.

The author and editor of dozens of publications on myriad topics, Frijhoff’s research interests include the cultural and religious history of Europe and North America, the history of education, and schooling and universities in early modern Europe. His book Fulfilling God’s Mission: The Two Worlds of Dominie Everardus Bogardus, 1607–1647 received NNI’s Hendricks Award in 2008. He is also the co-author of a broad synthesis of Dutch culture in the Golden Age entitled 1650: Hard-won Unity.

A student of European and North American history, Choquette’s classes include Women in Europe, the North American Indian, and France Since 1789. Her book Frenchmen into Peasants: Modernity and Tradition in the Peopling of French Canada received the Alf Andrew Heggoy Prize in 1998 for the best book in French colonial history. She has also received the Paul Ziegler Presidential Award for Excellence in Scholarship at Assumption College in 2010 and the Prix du Québec from the Government of Québec for an outstanding contribution to the field of Québec Studies in 2012.

Jeremy Bangs, PhD; Director, Leiden American Pilgrim Museum, Leiden, The Netherlands: “What were the English up to?”

The author and editor of over a dozen books, Bangs has held numerous positions in the fields of history and art, including Visiting Curator of Manuscripts at the Pilgrim Hall Museum in Plymouth, Assistant Archivist for the Town of Scituate, Chief Curator at the Plimoth Plantation Museum in Plymouth—all in Massachusetts—and Visiting Distinguished Professor of Art History at Arizona State University in Tempe, Arizona. He is recently the author of Strangers and Pilgrims, Travellers and Sojourners: Leiden and the Foundations of Plymouth Plantation and editor of The Town Records of Eastham During the Time of Plymouth Colony, 1620–1692.