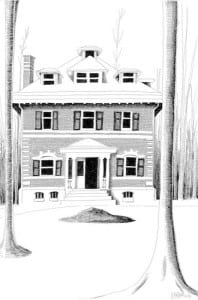 In June, Nyack Hospital and Montefiore Health System issued a joint press release announcing a merger. When the process is complete, Nyack will have a medical institution informed by over two centuries of history in health care. Will the philanthropic and progressive impulses that characterized the creation of nonprofit hospitals in nineteenth-century America endure?

A moment of reflection seems to be in order. Here’s a snapshot of the origins and early days of each health care institution that may provide some prologue and set expectations for what will follow. Nyack Hospital was incorporated in 1895. Initial funds were raised by an initiative called “Kirmess,” that drew inspiration from medieval festivals that used merrymaking to accomplish good. 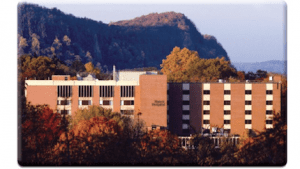 The original edifice, depicted in the sketch above, was designed by Marshall B. Emery and erected in 1900. The structure still stands as one of the complex of buildings that occupy the land between Midland, Highland, Fifth and Sickles Avenues. The original building now houses physicians’ offices.

The first Nyack Hospital ambulance was a horse-drawn conyevance that was purchased in 1903 for $550. The carriage was described in press accounts as a “shiny new vehicle,” when the first patient was transported from West Haverstraw with acute appendicitis. Before this new “ambulance,” patients were “jolted to the institution on the floors of delivery wagons.” 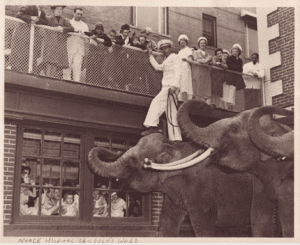 In the 1920s, a county-wide effort raised $400,000 to build a new addition and a nurses residence. A photo from the 1930s shows elephants from Pierre Bernard’s Clarkstown Country Club entertaining patients in the hospital’s Children’s Ward.

Nyack Branch NAACP President Frances Pratt began working at Nyack Hospital in 1959 after obtaining a degree in Nursing from Rockland Community College. During her 53-year career she held titles including Head Nurse of the Emergency Room and in the Office of Employee Health. This picture of her induction as a nurse includes George Celentano, center, the first male nurse at that institution.

The five story main hospital building was constructed in 1955. A sixth floor was added in 1983. The Union Bank Cancer Center was designed by local architect Jan Degeshien and built in 2000.

In April 2014, Nyack Hospital announced the creation of a Behavioral Health Center. The unit has 26 beds that are bolted to the floor, recessed shelves and covered lighting to ensure the safety of patients on the locked-down ward. 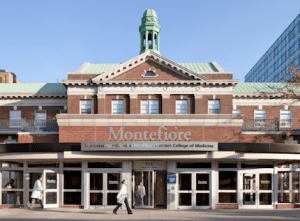 What is now Montefiore Health System was founded in 1884 by Jewish philanthropists as a home for chronically ill members of their community that were excluded from other facilities. By 1890, Montefiore was among the first to test tuberculin for the diagnosis of tuberculosis and by 1901, Montefiore was the site of one of the earliest clinical uses of adrenalin – asthma patients were treated with adrenalin chloride.

New York-Presbyterian Health, the system that Nyack Hospital had been affiliated with since 2004, has taken over Lawrence Hospital in Bronxville. The North Shore-LIJ Health System is partnering with both Phelps Memorial Hospital in Sleepy Hollow and Northern Westchester Hospital in Mount Kisco.

In January 2013, I spent a week in Nyack Hospital at my father’s bedside. His nearly $40,000 hospitalization was almost entirely covered by Medicare and his secondary insurer and he received excellent care. I counted our blessings that he had both good coverage and care and pondered whether future generations would be so fortunate.

How will this next round of consolidations affect the cost and quality of health care in Nyack? Will regional networks like New York-Presbyterian, Northshore-LIJ and Montefiore be responsive to local concerns? And in the most basic measure of the health of a hospital, will Montefiore keep all inpatient, outpatient, and emergency services at their current levels?

Sides seem to be forming in a giant game of chess in the health care industry.  Let’s hope that our hospital is a castle on the side that prevails and that patients are not used as pawns by the winners or the losers.

Special thanks to Carol Weiss. This story first appeared at Nyack News & Views.