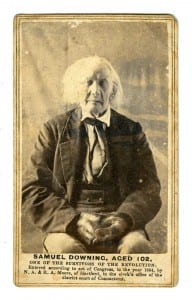 Private Samuel Downing of Captain John Dennett’s Company, Colonel George Reid Commanding, 2nd New Hampshire Regiment, was stationed at Fort Rensselaer/Fort Plain from February 20, 1782 until September 20th that same year when the regiment was transferred to Johnstown. Downing had his picture taken in 1863 as one of the last surviving veterans of the war for American Independence, a time when the American Civil War was at its height. Downing, who had made Edinburgh, NY his home after the Revolution, passed away there three years later in 1866 at the age of 105.

Also uncovered was a CDV photograph of Daniel Frederick Bakeman, a drummer in Marinus Willett’s Levies who also served at Fort Plain/Fort Rensselaer during 1781-83. Bakeman was born in Schoharie County, NY and was considered the last surviving veteran of the American Revolution to be photographed. The former Drummer died in 1869 at the age of 109.

Events leading to the discovery began last March when FPM Chairman; Norm Bollen attended the 3rd annual conference on the American Revolution at Colonial Williamsburg in Virginia. There Bollen met Don Hagist, author of numerous books on the Revolutionary War and editor of the Journal of the American Revolution. “We discussed the Mohawk Valley and Fort Rensselaer” said Bollen. Several weeks later he contacted me saying “I think I have run across Fort Rensselaer in my research for a book I am working on.” Don gave me the Samuel Downing name and background asking if I had any information on the 2nd New Hampshire Private. As it turned out I did. The orderly book of Captain Moses Dusten, 2nd NH detailed the unit’s activities at the fort that would be later known as Fort Plain and contained supporting documentation on Private Downing’s posting at the fort.

Private Downing had been one of six veterans featured in The Last Men of the Revolution published in 1864 by N.A. and R.A. Moore. The book featured brief biographies of the men along with photo images created through a new French process called a carte de visite or visiting card. The new photographic technology became immensely popular in the 1860’s as the standardized 2 ½ by 4 inch cards could be traded and fit into albums. Since that time the photographs of several more veterans of the Revolution have been located bringing the total of veteran’s images captured by the photographic process to ten.

Hagist, who was collecting research on the backgrounds of the men, is planning to revisit the work in a new book he is publishing later this year. “With the information on Private Downing confirmed I was able to locate an antique dealer who specializes in CDV’s and locate one of the original photos of the Fort Plain Veteran,” Hagist told The New York History Blog. Both the photo of Private Downing and the history of this early photographic process will be featured in a new Revolutionary War exhibit now being assembled at the museum, according to Bollen.

Author Don Hagist, who lives in Rhode Island, has agreed to speak at the museum this coming September 18th. Check the Fort Plain Museum’s Facebook page for details of upcoming event or visit their webpage.