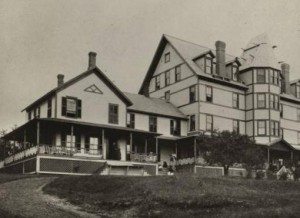 In 1896, New York City resident Prestonia Mann purchased an Adirondack estate in Keene and set about to create a summer community based on the 1840s Massachusetts Transcendentalist utopian experiment, Brook Farm. She sent an invitation to her circle of acquaintances – mostly progressive social reformers and educators – describing the place she named Summer Brook in homage to the earlier colony:

It includes a large common hall, a cottage, and about twenty acres of land traversed by a fine trout brook. The region—at the northern end of Keene Valley—is in the noblest part of the great wilderness. The land lies 2,000 feet above the sea, upon a small plateau jutting out from among the foot-hills of Mount Hurricane, in the midst of wild and rugged scenery, commanding a splendid mountain range from Whiteface on the north to Tahawus on the south.

Unfortunately, a hotel upstream, The Willey House, was dumping all of their raw sewage into the same “fine trout brook”, known as Gulf Brook.

Harvey Willey was a longtime Keene resident who started taking in summer boarders around 1877 and expanded his enterprise by building a four story hotel in 1891. Seneca Ray Stoddard reported that the capacity of The Willey House was about 70.

The clean living and high-thinking guests at Summer Brook could not have been pleased by the effluvia coursing down the trout brook and wafting through the air where they no doubt hoped to enjoy rustic frolicking. Miss Mann was faced with a more primary problem too; the water from the stream could not be used for drinking or cooking. 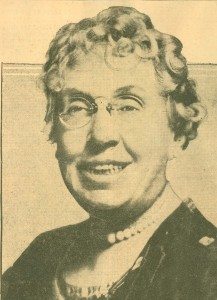 By 1899 Mann was so unhappy with the situation that she took Harvey Willey to court. The Ticonderoga Sentinel reported on the Essex County trial, during which Mann sought an end to the dumping of sewage by Willey along with damages. Richard L. Hand of Hand & Hale, a prominent law firm of Elizabethtown, prepared Willey’s defense while Mann was represented by Royal Corbin of Plattsburgh.

Willey lost the case, but Willey appealed the decision and the newly established New York State Supreme Court, Appellate Division, Third Department upheld Mann’s victory in May of 1900. The court explained, “that the discharge of such sewage into the stream does pollute and render it unfit for domestic purposes cannot be doubted and is we think established by the evidence and even though the plaintiff has not as yet put the water to such a use she had the right to the stream in its natural purity.” Furthermore, “that the defendant could justify his act under the order of the board of health we can find no statute nor rule of law which confers upon such board the right to authorize one citizen to create and maintain a nuisance to the injury of another.” As for the cash damages sought, the court noted that, “she was entitled to equitable relief against the defendant for interfering with it though the damages were merely nominal.”

The court ruled, “for a perpetual injunction against the defendant’s so discharging into the stream,” and Seneca Ray Stoddard reported in the 1908 edition of his travel guide that The Willey House, which had been sold and renamed Hurricane Lodge, “has open fireplaces, modern plumbing and approved sanitation.”

Mann could finally live up to one of the aims of her summer community, which she explained as entailing “the developing of vigorous physical health by means of exercise, rest and fresh air.” Mann was to continue to operate Summer Brook well into the 1930s, however, The Willey House / Hurricane Lodge was destroyed by fire in 1912.

Editor’s Note: Enid Mastrianni will present a lecture on the life of Prestonia Mann Martin on August 20th at 6:30 pm at the Lake George Historical Association (the former courthouse) in Lake George Village.

Photos: Above, the Willey House courtesy of the Northern New York Library Network; and below, Prestonia Mann Martin later in life.