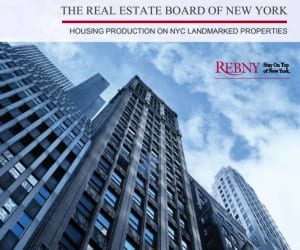 The Real Estate Board of New York (REBNY) is at it again! To welcome newly appointed New York City Landmarks Preservation Commission Chair Meenakshi Srinivan on her first day, the trade association and lobbying group released yet another study claiming that landmark designation inhibits the development of affordable housing and is at odds with Mayor Bill de Blasio’s administration’s goals of preserving and creating 200,000 units of affordable housing over the next ten years.

REBNY’s complaints are nothing new, they are based on the group’s long-held and often-repeated premise that building on a landmarked site is so expensive and arduous that no one would ever want to do it.

Using a selective comprehension of statistics, the study shows that the percentage of affordable housing created on landmarked property from 2003-2012 was much lower than on non-designated property. Given that the percentage of affordable housing developed over that period was only 16.94% of the total property development in New York City, their argument begins to look a little skewed. The crisis in affordable housing which has finally captured the public’s attention is not a landmarking issue; this is a deeper indictment of the real estate market to provide for the needs of New Yorkers and the subtle failure of government to guide market forces to help meet that need.

According to the REBNY study, only 3.64% of New York City is landmarked but “‘an astonishingly high 27.71%’ [of Manhattan is] designated”. This is neither astonishing nor remarkable. Despite concentrated efforts by the Landmarks Preservation Commission during the Bloomberg administration, boroughs outside of Manhattan remain under-represented among the designated historic districts due to a number of understandable but unfortunate historical reasons. We have every reason to believe that under the new administration, designation activity throughout the city will continue based on merit and community participation and this inequity will continue to be addressed. Finally, New York City’s affordable housing crisis is more pronounced in its outer boroughs, where there has been minimal designation by LPC. The focus on the lack of affordable housing in Manhattan due to district designation trivializes a very complex and serious issue.

Something that the REBNY report states but their press release does not trumpet is that during the 2003-2012 time period in question, 412 affordable housing units were created on landmark properties through renovation. Compare that to the 1,318 units constructed on landmark properties during the same period, and the numbers start looking different.

The Landmarks Commission itself answered these same charges when they were leveled by REBNY in September 2013 in an earlier previous report they issued on why they felt landmark designation was bad for New York. The LPC said:

[The report] fails to recognize the obvious: the purpose of the landmarking law is not to facilitate new construction; it is to preserve historic buildings and neighborhoods. So the finding that new affordable housing construction in landmarked buildings and districts has been limited is hardly a surprise. More interesting to your readers – and to those who are genuinely interested in affordable housing – is that more than 1,100 units of affordable housing have been created or preserved in historic districts citywide since 2004, and [recently] an affordable development was proposed in the Gramercy Historic District. The Bloomberg Administration has built and preserved more affordable housing units than any other city in the country – enough to house the entire city of Atlanta – and we have done it without sacrificing the historical character of the city, which adds both financial and civic value to neighborhoods. Affordable housing and historic preservation can go hand-in-hand.

To which we can only add, the only reason which we think that landmark designation might add to the housing crisis is that by preserving the architectural integrity of a beautiful historic city, lots of people want live here.