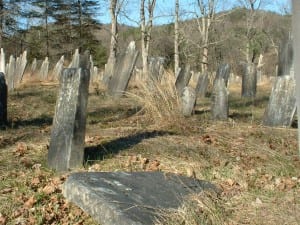 We remember loved ones. We remember those about whom we care and who are now departed. We remember our ancestors for one, two, and maybe three generations if we are lucky enough to have known them. Beyond that memory becomes difficult, figures become blurred, and people are forgotten.

We do not simply dispose of the body when death occurs, we perform a ritual. Whether or not the ritual aids the one who has died is beyond the scope of this post; the ritual certainly is intended to aid the living to continue their journey in this life.

The standard way in which the body of the departed is treated is burial. Millennia ago in the neolithic (New Stone) and chalcolithic (Copper) ages, the bodies might be buried in the home of the living. Today, archaeologists find these bodies under the floors of ancient homes. Obviously there is limit as to how many generations can be buried within a single home.

In colonial times, the farm itself served as the burial ground. These family graves may be found in many places in many communities throughout the state but they have not always fared well. For example, in the village of Port Chester in 2004 Gregory Fragiacomo, seeking to fulfill his community requirement to obtain the rank of Eagle Scout, led the effort to clean up a cemetery now in the midst of suburban homes…and had to overcome a legal challenge to do so. The tombstones, which often are still legible, are primarily from the Brown family of the Town of Rye in the 18th century.

Back in 1998, the burial site of 15 members of the Merritt family who arrived in the 1670s was located near the Byram River where a Costco was to be built. The deceased were buried between 1735 and 1851. Archaeological excavations prior to the construction revealed no trace of the burials. Analysis of old maps and histories clearly document the presence of the graves. Who moved them and why remains a mystery. But there is no truth to the rumor that the spirits of the Merritts haunts the village and town or the Merritt Parkway which is the continuation of the Hutchinson River Parkway in Connecticut.

In New Rochelle, where I grew up, there was a slight twist to the pattern of farmland burials. There was a Huguenot farm which eventually was acquired by Quakers. Even though slavery had been abolished in New York, it remained difficult for free blacks to find a place to be buried. A Quaker family then made their farm available to blacks in the surrounding area to be buried there. The cemetery appears on maps of New Rochelle as late as 1978, but with a caveat. A boundary line now divides it. One side is now foul territory on the third base side of the playing fields of a parochial school with nary a trace of the cemetery remaining. The other side is now part of the property of a seminary. It is overgrown with trees and shrubs, but in the winter when the vegetation is bare it is possible to see some headstones, along with foul balls hit over the fence. Back in 1998, the story of the cemetery even made the front page of the local paper including a picture of me. The hope was not only to clear the area, but to also include its history in the local school curriculum. That hope was not fulfilled.

Every village, town, and city has stories to tell of where the people of the 17th, 18th, and 19th centuries were buried. These burial sites may be scattered here and there throughout the community often unknown and frequently forgotten; municipalities may have acquired abandoned property that they don’t know what to do with. And some may have disappeared.

The best preserved burial sites from that era tend to be in churches. Recently I wrote about the White Plains Presbyterian Church celebrating its 300th anniversary. Its 18th-century graves include connections to the American Revolution and America’s first spy ring. Other posts in New York History have described excavations now going on in Mount Kisco at church burial grounds. On July 4, Jim Kaplan leads tours to Trinity Church graveyard in lower Manhattan to lay wreathes on Revolutionary figures. Nearby St. Paul’s Church combines ancient graves and being a place of refuge on 9/11.

These churches with burials from the colonial era tend to be Episcopal, Presbyterian, and Dutch Reformed although clearly there are other denominations involved as well. The newer Methodist and Quaker religions date later as do most Catholic cemeteries. From these churches with their graveyards, one can tell the story of a community as remains true today.

But then something happened which rendered church burials inadequate: the population grew and became middle class. Plus not everyone belonged to a church or had a farm. The result was the creation of something brand new in America: cemeteries, that is, burial places not attached to church. These cemeteries weren’t just separate plots of land, they were rural cemeteries and they represented a change in American history. In 1847, the New York State Legislature passed the Rural Cemetery Act to authorize burial in these new organizations. 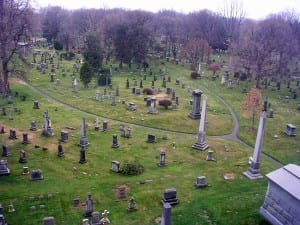 Rural cemeteries were more than a place where the burgeoning population could be buried. They were contoured landscapes where the living could have a spiritually renewed experience in the presence of the headstone of the departed. Brooks would babble, springs would flow, and gentle waves of the land would serenely envelope the living. As people sought more in life for their homes, so they sought more for their eternal resting place. The sublime experience wasn’t limited to Hudson River Art painters but was available to the ordinary family who could now spend a Sunday amidst a tranquil setting brought to them by the kind of people who would later design Central Park.

The Rural Cemetery movement swept through New York with great speed. From Brooklyn to Troy and westward, these islands of serenity were places people wanted to visit while alive and be buried in when dead. For example, a few blocks north of the White Plains Presbyterian Church is the White Plains Rural Cemetery. Adjacent to the Dutch Reformed Church Burial Ground in Sleepy Hollow is the Sleepy Hollow (Rural) Cemetery where Washington Irving is buried. The Fishkill Rural Cemetery is also only a few blocks from Trinity Church. In Poughkeepsie and Troy, the rural cemeteries hug the Hudson providing often spectacular views even before bridges and the Capital Plaza were built. At the Albany Rural Cemetery, Peter Hess can tell a story about every grave the same way Hugh MacDougall can about every house in Cooperstown.

These cemeteries naturally are terrific locations for Halloween.  Once there was an association of some kind for these cemeteries. I don’t know how active it is but clearly they are part of the history of America from the 1830s on.

There is a New York State Association of Cemeteries based in Albany which at some point should be invited to participate in the discussions on the New York History Commission. A search for rural cemetery on the Path Through History website calls up U.S. Presidents, because one is buried at the Albany Rural Cemetery, and Natural History, for reasons I can’t discern. It would appear that according to ILoveNY the rural cemetery movement has disappeared from tourism as it has from the curriculum.