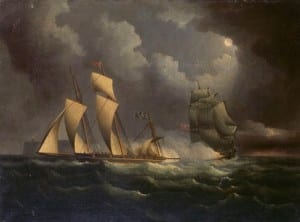 On the morning of June 10, 1723, just before the break of dawn, a British warship stationed out of New York spotted two sloops sailing less than 50 miles south of Long Island. The captain of the warship, Peter Solgard, was all but certain the sloops were trouble. Three days before, he had been warned by a sea captain about a pirate crew under the command of a notoriously violent captain, Edward Low. But in the HMS Greyhound that morning, Solgard did not attack. Instead, Solgard tacked and set a southerly course, keeping the pirates in view but not approaching, “to encourage them to give him chase.”

It wasn’t long before the pirates spotted the Greyhound and, undaunted, headed directly for the powerful warship. It was slow going, however – the morning had broken very calm off the coast of New York, with little wind at sea. Making almost no headway under sail, the pirates were forced to row the sloops with long oars. More than two hours passed as the Greyhound and the two sloops moved slowly through the seas. At about 7:30 a.m., with slightly more wind, Solgard tacked again and started to close the distance between the warship and the pirates. By then, the guns aboard the vessels had been made ready for action. The next twelve hours would witness one of the most dramatic sea battles with pirates in the history of America.

By eight o’clock that morning, the pirates were within several hundred yards of the Greyhound. Black pirate flags were raised on on both sloops. Edward Low’s crew flew a flag depicting a skeleton with two outstretched arms, one hand holding an hourglass, the other clutching a dart dripping with blood. Each of the sloops fired one shot each.The black flags the pirates raised and the first two cannon shots were warnings – they signaled that the sloops were pirates, and expected the Greyhound to surrender immediately. Many of the vessels Low’s crew overtook during his three-year reign quickly surrendered, and the ships and their crews were captured without a battle. But not the Greyhound. The warship was also heavily armed and ready for battle, and gave no sign of yielding.

The three vessels continued to maneuver slowly and cautiously through the water, changing course from time to time as they circled each other. At some points the pirates and the Greyhound were as much as three-quarters of a mile apart, but the men aboard each ship always kept the other vessels in their sight. After sailing for another half-hour, the pirates came within range and attacked again. Low ordered the black pirate flags to be pulled down and another—their “bloody” red flag—raised in its place. This meant the opportunity to surrender, and be given safe quarter, was gone and the pirates would now fight to the kill. “When they fight under the Jolly Roger, they give quarter, which they do not when they fight under the red or bloody flag,” one sea captain wrote after he was captured by members of Low’s crew. 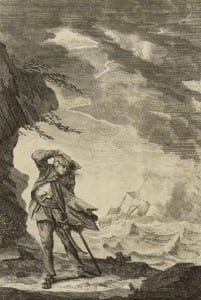 The pirates and the Greyhound battled continuously, firing at each other with their cannon and muskets. The Greyhound had twenty guns and 130 men aboard, a formidable match for the two pirate sloops, which had about eighteen guns between them. The first wave of fighting continued for about an hour that morning before the pirates broke away from the battle and tried to sail off. But there was still almost no wind that day, and even rowing with oars, the pirates were unable to put much distance between themselves and the warship. Between two and three o’clock in the afternoon, Low was able to escape in his sloop, but the Greyhound was again within range of the second sloop, the Ranger, and started firing again.

The battle continued for several more hours, and the Ranger took a number of hits from the Greyhound. By late afternoon, it became clear that the pirates aboard the Ranger were losing the fight, but the quartermaster in command of the Ranger, Charles Harris, could still not manage to retreat. With so little wind and the mainsail torn to pieces, even by rowing with oars it was impossible for Harris’ crew to get free of the Greyhound. At about five o’clock that afternoon, Harris signaled his surrender. Harris and thirty-five members of his crew who had survived the battle were taken prisoner and many of them were taken back to Newport, Rhode Island, in Harris’ sloop.

In the Greyhound, Solgard continued to chase after Low for several more hours, but lost sight of their sloop around nine o’clock that evening somewhere in the sea between Block Island and Martha’s Vineyard. The Greyhound then returned to Newport that night. Harris’ crew was put on trial a month later, and most of the pirates were convicted and hanged in July in what remains one of the largest mass executions in the history of America.

When he returned triumphantly to New York less than a week after the historic execution, Solgard was honored by the city council. Low and his crew “have been remarkably cruel, and have done vast damage in the West Indies,” wrote New York governor William Burnet, “but the honor of destroying them has been reserved for Captain Solgard, whose merit makes everybody glad it has fallen to his share, at the same time that they rejoice at the public deliverance.” The mayor presented Solgard with the “Freedom of the City,” a certificate of gratitude that symbolically conferred the privileges of residency to the captain from England. The certificate was presented along with a gold box praising his efforts in the “war against the enemies of the human race” and engraved with both the coat of arms of New York and a depiction of the Greyhound’s battle against the pirates. The city council also adopted a resolution praising Solgard for his “signal services done against the enemies of mankind.”

Gregory N. Flemming is the author of At the Point of a Cutlass: The Pirate Capture, Bold Escape, and Lonely Exile of Philip Ashton, published in June (www.gregflemming.com).

Illustrations: Above, a British warship attacks a pirate vessel at sea (courtesy of the National Maritime Museum, London); Below, the pirate captain Edward Low, as depicted in a book printed in 1736. While it is impossible to know exactly what Low looked like, one ship captain described the pirate who was best known for his horrific forms of torture as “a little man.” Courtesy of the John Carter Brown Library at Brown University.