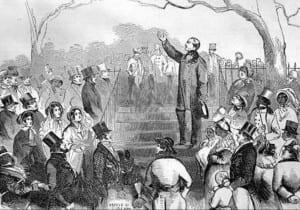 Robert W. Arnold III, a career public historian now retired from the New York State Archives, will give a talk entitled “Leaning into the Storm: Perfectionism in Antebellum New York” on Saturday, August 9, 2014 at the Schenectady County Historical Society.

New York State was a place of rapid change in the antebellum era, the epicenter of perfectionist religious and social reform movements, inspired largely by Yankee immigrants from New England and spread as those immigrants themselves settled along the routes of turnpikes and canals. Uncertainties associated with ongoing revolutions in transportation, finance, communications and industry were reflected in popular movements such as temperance, abolition, women’s rights, dress-, prison- and educational reform.

Changes in communities struggling to absorb thousands of Irish and German immigrants concerned native New Yorkers whose world already was in social turmoil. Reformers were concerned with morality and practicality and attempted to improve the world around them. Reform movements were shifts in the state’s emotional and intellectual climate as the nation drifted toward war; some would motivate New Yorkers enlisting in 1861.

This event begins at 2 pm and is free and open to the public; sponsored by the New York Council for the Humanities Speakers in the Humanities Program. The Schenectady County Historical Society is located 32 Washington Avenue, in Schenectady, NY. The Schenectady County Historical Society is wheelchair accessible, with off-street parking behind the building and overflow parking next door at the YWCA.

For more information, contact Librarian Melissa Tacke at 518-374-0263, option 3, or by email at librarian@schenectadyhistorical.org.