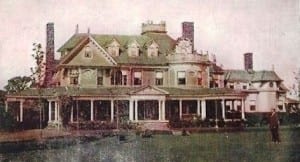 Few places in Sullivan County have a more interesting history than the hamlet of Glen Spey in Lumberland, NY.  And fewer places still, possess the architectural treasures that grace that area.

So much so, in fact, that architect Robert Dadras has dubbed the area “Sullivan County’s Newport,” referring, of course, to the Rhode Island resort city where so many of the millionaires of America’s Gilded Age built their remarkable summer “cottages.”

That, more than anything else, is why Glen Spey is included as part of “The Magical History Tour,” this year’s Architectural/Historical Bus Tour, scheduled for June 7.

“There is no place in Sullivan County, with the possible exception of Loomis, that possesses the kind of architectural treasures we find in Glen Spey,” Dadras says.  “And it has a certain historical significance, as well.  I always love including it in one of our itineraries.”

The architectural treasures that make Glen Spey so special are largely the legacy of George Ross Mackenzie and his family. Mackenzie, born in Scotland, worked his way up from a line mechanic to become the fourth president of the multi-national Singer Sewing Machine Company in 1882. By that time, he had already purchased property in what was then known as South Lebanon and begun the transition to what he called Glen Spey, or “valley of the spring.” His own castellated mansion, The Homestead, is no longer extant, but several other buildings connected to him are, including three of the mansions built by his children. George Ross Mackenzie died in March of 1892, after periodic bouts of ill health that began with the death of his wife two years before.

Although there is no direct evidence to prove the point, it is likely that at least some of the Mackenzie era buildings were designed by the renowned architect Henry J. Hardenbergh, who had been commissioned by Mackenzie friend and colleague William F. Proctor to design the nearby Loch Ada mansion he used as a summer residence, as well as other structures on his estate. There are considerable similarities between some of the Mackenzie buildings and those of Proctor.

Hardenbergh, of course, is most known for designing the original Waldorf-Astoria hotel, the world famous Plaza Hotel on Fifth Avenue and Central Park South, and the Dakota apartments on Manhattan’s Upper West Side.

Today, the Mackenzie legacy includes the mansions once known as Ardmore, Woldcroft, and Burn Brae, as well as a number of smaller– but in some cases no less architecturally splendid– buildings that once served those mansions. Mackenzie was also instrumental in the construction of the school house– now part of the Lumberland Town Hall.

Ardmore, built in 1891 for Mackenzie’s daughter, Rebecca Mackenzie Vanderbeek, has recently been restored and is currently operating as part of the Mountain View Manor Resort.  The grounds of the Mountain View Manor also include the former site of another mansion, Bramble Brae, built for Mackenzie’s daughter, Grace Mackenzie Ewing. It was demolished in 1975, but a few outbuildings remain.

Woldcroft, another of the mansions of George Ross Mackenzie’s children, built for his son, James Stone Mackenzie around 1890, is readily visible from the road and will also be studied. Woldcroft has not been restored, but its exterior remains in mostly original condition.

The newest of the so-called Mackenzie mansions is Burn Brae, which was painstakingly restored years ago by bicycling legend Mike Fraysse, and, interestingly, served as the location for the reception on one of the earliest Architectural Bus Tours years ago. Burn Brae was built in 1908 for Mackenzie’s daughter Margaret Ellis.

The Magical History Tour this year is being sponsored by The Delaware Company in collaboration with The Museum at Bethel Woods and The Liberty Museum & Arts Center.  The theme of the tour is “Revolution to Revolution” in that it will highlight the area’s history from the Revolutionary War era through the cultural revolution of the 1960s.

The bus will leave the parking lot at The Museum at Bethel Woods at precisely 9 AM and besides Glen Spey will visit the existing and vanished hamlets of Kauneonga Lake, White Lake, Black Lake, Forestine, Wellstown, Sullivantown, Eldred, Glen Spey, Pond Eddy (Kilgour), Barryville, Minisink Ford, Narrowsburg, Heirsville and Bethel.  Stops will include the Minisink Battleground Park, operated by the Sullivan County Division of Public Works, the Delaware Aqueduct or Roebling Bridge, where a National Park Service interpreter will talk about the oldest wire rope suspension structure in North America, and the Fort Delaware Museum of Colonial History in Narrowsburg, where a picnic lunch will be served before the group tours the Fort.  The bus then visits the Woodstock site, and returns to the Museum at Bethel Woods for a tour of the museum.

The tour is scheduled for Saturday, June 7, and seats must be reserved in advance by June 1.  Reservations can be made by calling Debra Conway at 845-557-0851, but as space is limited, seats will not be reserved until payment is received.  Seats are $45.00 each, which includes lunch and admission to all sites.  Checks should be made payable to The Delaware Company and mailed to Debra Conway/P.O. Box 185/Barryville, NY 12719.

Photo: Burn Brae, built in 1908, is one of the extant mansions in Glen Spey that served as summer residences for members of the family of George Ross Mackenzie. Pictured here as it appeared in its heyday; it has since been restored.