The Preservation League of New York State has named a 6-mile section of the Old Albany Post Road in Putnam County to its list of the Empire State’s most threatened historic resources, Seven to Save.

This path between the settlements that would become known as Albany and New York City followed earlier trails established by the Native residents of the region. It provided for movement of troops, supplies and postal mail during the French and Indian and Revolutionary Wars. Connecting homes in a sparsely settled area of Garrison, the Old Albany Post Road still retains landscape features from Colonial times and is listed on the National Register of Historic Places.

Following extensive flooding in spring of 2007, a 100-yard section of the dirt road was reengineered and paved, despite numerous studies that illustrate the long-term sustainability of dirt roads. In fact, the modern section is now eroding other sections of the road due to poor drainage. 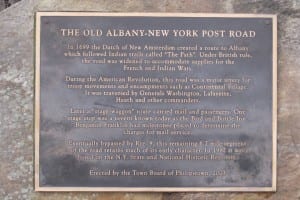 “Since 1999, Seven to Save has mobilized community leaders and decision-makers to take action when historic resources are threatened,” said Jay DiLorenzo, President of the Preservation League. “A Seven to Save designation from the League delivers invaluable technical assistance, fosters increased media coverage and public awareness, and opens the door to grant assistance for endangered properties.”

The Old Road Society was founded to protect the surviving dirt road component of the Old Albany Post Road, along with the other remaining historic dirt roads in and around Philipstown, which has 30 miles of dirt road. The Society and the League are calling for an engineering report for the 6-mile section of the Old Albany Post Road, outlining sustainable drainage solutions, surface treatments and maintenance practices to guide the town’s highway department. A local road protection ordinance would further steer maintenance practices toward preservation.

“Through the Seven to Save program, we provide targeted support to seven of New York’s most important and endangered historic resources,” said Erin Tobin, the Preservation League’s regional director for technical and grant programs for eastern New York State. “Whether sites are threatened by insensitive, ineffective or insufficient public policies, general neglect, or, in some cases, outright demolition, we have a proven record of working with community advocates to save a number of significant properties.” 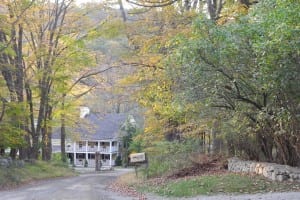 Terry Zaleski, President of The Old Road Society of Philipstown, said, “We are excited to have been named a Seven to Save site by the Preservation League of New York State. It is a validation of how special the Old Albany Post Road is as part of New York State’s history. From Native American trail, to Queen’s Road during the reign of Queen Anne, and later, the King’s Road, during the reigns of George I and II, the road served our nation’s Continental Army throughout the Revolutionary War. The road connects residents and visitors to our present world, while serving as an important link to our past. It merits watchful protection, and this designation will promote that.”

Since 1999, publicity and advocacy resulting from Seven to Save designation has led to the rehabilitation and reopening of the Oswego City Public Library, the rebirth of Montauk Manor on Long Island, and the rededication of the once-abandoned George Harvey Justice Building in Binghamton along with successes at several other locations.

The Preservation League of New York State is a not-for-profit membership organization founded in 1974. The League invests in people and projects that champion the essential role of preservation in community revitalization, sustainable economic growth, and the protection of New York’s historic buildings and landscapes. It leads advocacy, economic development, and education programs all across the state.