Last week in this space, I addressed the subject of cross-burnings in the North Country, which became common in the 1920s during a resurgence of the Ku Klux Klan. Throughout the region, meetings were conducted by Klan leaders, and thousands of followers were added to their ranks. For many of us, it’s an uncomfortable part of Adirondack history, but there is another side to the story. Despite widespread intimidation spawned by secret meetings, robed figures, and fiery crosses, New York’s citizenry rose in opposition to the Klan policies of bigotry and exclusion.

Speaking out against the KKK carried inherent risks for average folks, and for politicians as well. Between 1915 and 1922, more than a dozen senators and government officials in Washington were acknowledged members of the Klan, and the organization played a role in the national elections of 1924 and 1928. But in spite of their rise to power behind claims of patriotism and “Americanism,” the KKK was judged by many as a blight on society and distinctly un-American.

If you dislike the KKK’s beliefs (it’s a shame there’s still a need for such an “If” clause), and you’re a New Yorker, you’ll be happy to know that this state played a major role in drastically curtailing the Klan’s influence.

However, Democrats and Republicans alike still managed to embarrass themselves in the 1920s, generally agreeing that bigotry was wrong, but remaining reluctant to speak out specifically against the Klan because it could bear election consequences. Isn’t it refreshing to know that the political cowardice we see so often today is nothing new?

But there were those who spoke out with no hesitation. The vociferous anti-Klan movement led to the passage in 1923 of the Walker Law, which required oath-bound organizations in New York to provide details on their rules, regulations, and membership. (Unions and a few others were exempt.)

It’s important to remember two things. 1) This second rising of the KKK targeted not only blacks, but Jews, Catholics, immigrants, and criminals, declaring all of them to be un-American. 2) A basic, non-negotiable tenet of the Klan required secrecy of membership.

Thus, the Walker Law created an ingenious catch-22: Klan members were vehemently anti-criminal, but becoming a Klan member was now a criminal offense because of the oath of secrecy.

The Klan’s legality soon became an issue for the courts. Less than three months after the new law took effect, US Supreme Court Justice Elis Staley (in Elizabethtown) granted the state an injunction against the KKK and Kamelia (a female branch of the Klan) for fraud and other charges.

As the state moved towards enforcement, anti-Klan forces relaxed their efforts, but a year later, it became clear that the KKK would circumvent the new rules or simply refuse to comply.

Citizens once again united, bringing pressure to bear on communities where the Klan was organizing and seeking new recruits. Public protests soon led to physical confrontations. In 1924, sheriff’s deputies were summoned to a riot in Ballston, where Klan leaders were roughed up and chased off. 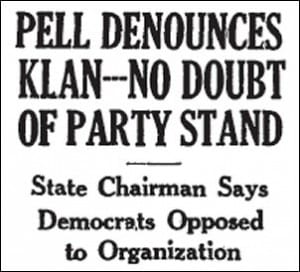 The movement crept north, igniting violence at Glens Falls, where a building hosting an organizational meeting was surrounded by a crowd estimated at 2000. Speakers were heckled while streams of rocks and other debris were hurled through windows, sending shattered glass among the attendees. When the meeting ended, several in attendance were beaten by the waiting crowd.

In South Glens Falls, a similar scene occurred. Bottles were thrown, plate-glass windows were smashed, and Klan leaders curtailed their plans in the face of an unruly mob.

By late 1924, the Klan also met resistance in Ticonderoga. Crosses were burned and members were recruited, but most locals refused to rent land or buildings to them for their activities, limiting the Klan’s effect. Results were the same in Crown Point and Westport, where state officials were notified that KKK meetings were being held unlawfully. When it was confirmed that no membership information had been provided as required by the Walker Law, an official investigation was begun.

Still, the Klan continued to spread north. In Clinton County, near the Canadian border in the town of Champlain, bootleggers were the highest-profile criminals in the 1920s. Among them was Alex Bodette of Champlain, who in 1926 found a warning sign near his home: “Alex Bodette and Others, Bootleggers and Lawbreakers of Champlain Must Stop. You Are All Known, and Where the Law Fails, We Begin.  K. K. K.”

But bootleggers and their customers, hardened by frequent car chases and gun battles, weren’t about to cower before the Klan’s vigilante threats. Business continued as usual, without interference.

The KKK extended its reach west into Franklin, St. Lawrence, and Jefferson Counties, where some large gatherings were led by Klansmen on horseback. Riders were clad in full Klan costume, and their horses were robed as well. Dozens of meetings were held, but in many North Country communities, people voiced their displeasure that the Klan was operating in their midst.

Years later, Rev. J. Ralph Davie, once a pastor at several churches in the Ticonderoga area, addressed those terrible times when the Klan spread its poison within New York’s borders. His plea for brotherhood nearly a century ago fits just as well in today’s America.

“We need to be reminded, particularly in these times, of the need for brotherly good will among the citizens of our land. There is already a rising tide of ill feeling against groups within our nation, a tide which must be stemmed if the common decencies of life are to be realized. It is so easy to seek a solution to our common social problems in the stupid generalities of bigotry and ill will. Yet a solution will never be found in those directions, for such attitudes only breed more difficulties of the same kind.”

While crosses burned across the region in the 1920s, and meetings in northwestern New York sometimes drew more than 1000, the court battle continued over Klan membership-record availability. Finally, in late 1928, the US Supreme Court upheld New York’s Walker Law.

While recognizing that organizations had rights, the justices said the Klan’s secrecy was “a cloak for acts and conduct inimical to personal rights and public welfare.” In other words, American citizens had the right to not be afraid.

Without the public use of fear, threats, and physical violence, the Klan was hamstrung, losing much of its power and influence. After a run nationally, it was relegated to mainly regional influence, in no small part because, early on, New York had taken a stand.