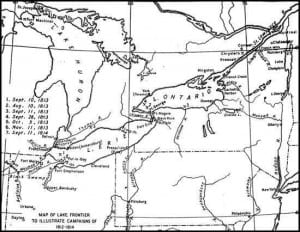 Communities on both sides of the St. Lawrence River had built an interconnected life of social contracts, trade, marriages, friendships, and respectful neighborliness in the years since the American Revolution. Thus, the approach of war in 1812 found little enthusiasm among the civilian populations of New York and Upper Canada.

Find out more about this unwanted and unpopular war when Victor Suthren presents The St. Lawrence War of 1812: The War No One Wanted on Saturday, May 10th, 2 p.m. at the St. Lawrence County Historical Association at the Silas Wright House, 3 East Main St., Canton.

Victor Suthren is a Canadian writer and historian who lives in Merrickville, Ontario. Suthren was educated at Bishop’s, McGill, and Concordia universities, and served as the Director General of the Canadian War Museum in Ottawa from 1986 to 1997. He is also the author of thirteen books of both fiction and non-fiction, among them a compendium history of the War of 1812 published by McClelland and Stewart in Toronto in 1999.

On Saturday, Suthren will discuss how the mutual dislike for the War of 1812 by settlers on both sides of the St. Lawrence River shaped the tumultuous events that took place from 1812 to 1814 on the great river and its shores, particularly during the great American military effort in the Fall of 1813.  Ordinary citizens and influential businessmen alike, the latter such as David Parrish of Ogdensburg, did what they could to mitigate a war they felt was shaped in Washington and Whitehall—and not in the hearts of the inhabitants of the great river valley.

The St. Lawrence County Historical Association at the Silas Wright House is open Tuesday through Saturday noon to 4 p.m., Friday noon to 8 p.m.  Admission to the museum is free; admission to the archives is free for members and children, $2.50 for college students, and $5 for the general public.  The St. Lawrence County Historical Association is located at 3 E. Main St., Canton.  Parking is available in back of the SLCHA, next to the museum’s main entrance.