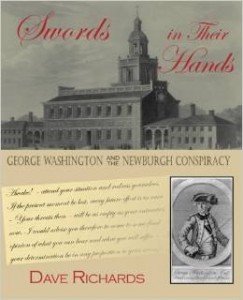 A new book by Dave Richards, Swords in Their Hands: George Washington and the Newburgh Conspiracy (Pisgah Press, 2014) is being hailed as the first book-length account of a plot that can be described as the closest thing to a coup that the United States has ever experienced.

In late 1782, many Revolutionary War officers in the Hudson Highlands had grown angry and frustrated that they had not been paid—for months or even years. With victory in sight, they feared they might never get their back pay and promised pensions, because the Continental Congress, meeting in Philadelphia under the Articles of Confederation, had no authority to raise money. Nationalists wanted Congress to have direct taxation authority, while their opponents insisted that only individual states should have that power.

As the last months of the war approached, several key army officers, supported by some members of Congress, set in motion a plot to terrify state legislators and their delegates in Philadelphia into granting Congress the direct taxation authority it needed to pay the promised wages and guarantee future pensions. Their threat presented Congress with two alternatives.

Option one was worrisome: after defeating the British, the army would refuse to lay down their arms, leading Washington to suspect the officers might turn their armies toward Philadelphia itself to enforce their demands. The second option could be even worse: the army might lay down their arms before victory was achieved, allowing the Redcoats to quell the revolution … and making every leader of the “colonists’ rebellion” liable for treason. For as Benjamin Franklin had pointed out, if the rebels—our Founding Fathers—didn’t “hang together, we will all hang separately.”

In March, 1783, hundreds of Washington’s officers, “ready for revolt,” gathered at the newly-built Temple of Virtue at the New Windsor Cantonment to agree on the first steps toward implementing their plan. Then, to their shock, General Washington himself arrived. Having himself “grown grey and almost blind in the service of my country,” he chided the officers, put down the uprising, and in a 15-minute address changed the course of history.

Author Dave Richards is a Connecticut native who has a BA in Russian language and literature from George Washington University and an MA in Slavic and East European languages and literatures from Ohio State. An avid student of American history, Dave writes regularly for The Historical News, a series of historical quarterlies published by the Southern Historical News and distributed throughout the South. His interest in history led him into extensive research on the Newburgh Conspiracy and the key figures involved.