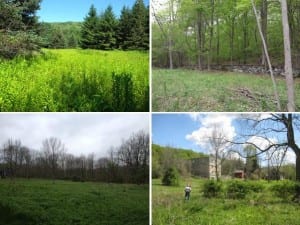 The parcel, known as the North Pastures, was purchased from the Darrow School, whose campus consists of the former Church and Center Families of Mount Lebanon’s former Shaker community. The purchase was achieved in a partnership with the Open Space Institute, a nonprofit conservation organization dedicated to preserving scenic, natural, and historic landscapes, and also with funding from a 2012 grant from New York State.

The acquisition is part of the museum’s strategic plan, which calls for preserving the historic site and expanding the museum’s educational offerings, leading to the museum’s eventual complete relocation from its former Old Chatham facility. The North Pastures will provide the museum with needed additional space for construction of facilities to house its collection and to welcome visitors, and will give the historic site much needed visibility, with nearly a quarter-mile of frontage along Route 20.

The expansion of the museum’s land ownership also coordinates with its efforts to preserve the landscape and structures of the North Family, which has been listed as one of the 100 most significant endangered historic sites in the world by the World Monuments Fund.

Contained within the North Pastures are remnants of the Lebanon Springs branch of the original Boston-Albany Post Road, four-foot high stone walls bordering the croplands and grazing pastures the Shakers used for agricultural business, and a Shaker-built stone memorial at the location of an early scene of mob violence against the Shaker founder Ann Lee.  The acquisition opens these important places of history to interpretation and the entire site to natural appreciation.

The pasture lands have an important history as well in relation to the adjacent Great Stone Barn, built in 1858 as the largest stone cattle barn in North America.  That building is currently undergoing a $2 million stabilization project.

In purchasing the North Pastures, the museum will enter into an easement for its perpetual conservation for the public benefit. With future funding, the museum will improve trails and provide other visitor amenities. The combination of greater public usage and visibility with expanded educational offerings envisioned by the museum will create a significant link in drawing visitors to the community and to the greater area. When completed, the site will serve as an important link among major cultural tourism destinations in the Berkshires, Hudson Valley, and Capital Region.

“We are delighted to acquire this site for the museum, and for the public,” said museum President David Stocks. “This land is an important part of Shaker history, and we are honored to be part of an effort that includes many community partners, including New York State and the Open Space Institute, who are working to protect lands of significant scenic, environmental, and historic value around Mount Lebanon.”

The Shaker Museum – Mount Lebanon is dedicated to engaging and inspiring local, national, and global audiences by telling the story of the American Shakers. The museum’s collections span over 60,000 objects and it stewards the North Family historic site at Mount Lebanon, a National Historic Landmark. The museum opens seasonally at the site on June 13.