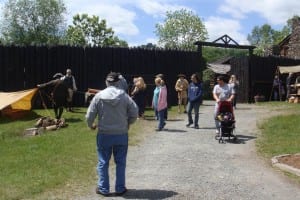 There seems to be a great movement underway in recent years—the European Union is a good example—to make all places the same or at least more like each other.  This global homogenization, for want of a better term, has threatened national identities and it has also created new challenges for those areas whose economies have been dependent upon heritage tourism.

Heritage tourism is defined by the National Trust for Historic Preservation as “traveling to experience the places, artifacts and activities that authentically represent the stories and people of the past,” but it is only viable if different places have different stories to tell.  Eliminating differences makes that a real challenge.

In some cases the response to this challenge has been innovative and effective, as tourist destinations have learned to develop their history, architecture, culture, and even their cuisine to tell a story that sets them apart, establishing in doing so a uniqueness that will attract visitors.  Specifically, these visitors are known as heritage tourists, and according to study after study, they travel more frequently and spend more time and more money in their travels than typical non-heritage tourists.   A 2009 study, for instance, found that heritage tourists average more than five trips every twelve months, as compared with 3.98 trips per twelve months for the typical non-heritage tourist.

The same study reported that heritage travelers spend more than other type of travelers—in fact a lot more– spending an average of $994 per trip as opposed to $611 per trip for other tourists.   All in all, heritage tourists contribute nearly $200 billion to the U.S. economy each year searching for the unique stories of regions all across America.

Of course, identifying the characteristics of a particular area that make it unique is the necessary first step in this process, and that is why the concept of Revolution to Revolution as a tool to promote heritage tourism in Sullivan County was developed a couple of years ago by the non-profit group The Delaware Company.

The Delaware Company, named for the group of hardy pioneers who braved inestimable hardships to establish the first permanent European settlement in the Upper Delaware River Valley in the 1750s, was formed to promote and support the history and historic landmarks of the region.  The group recognizes that among the things that make this area unique is that its history encompasses definitive events in what are arguably two of the most significant revolutions to take place in our country, the colonial era revolution against the oppressive rule of England in the 1760s that culminated in the establishment of a new nation, and the cultural revolution of the 1960s as symbolized by Woodstock’s three fabled days of peace and music in a muddy alfalfa field in Bethel.

That is Revolution to Revolution.  Far more than just clever phrasing, it is descriptive of a tourism synergy that some believe could prove to be the linchpin of economic development in the region whether Sullivan County ends up with one or two casinos or none at all.

Synergy defines a product in which the benefits of mutual cooperation exceed those that each player can attain on its own.  It is generally accepted among tourism experts that the success of a particular tourist attraction depends not only on the intrinsic value of the attraction itself, but on the quality of the environment in which it is provided, including the other attractions within that region.  One example of that synergy in Sullivan County could be the Fort Delaware Museum of Colonial History and the Museum at Bethel Woods.  When marketed as complimentary attractions, the number of visitors to both can be increased beyond the limits of either one by itself.

And that is the theme of this year’s Architectural/Historical Bus Tour, also known as The Magical History Tour, sponsored by The Delaware Company in collaboration with the Liberty Museum & Arts Center and the Museum at Bethel Woods and scheduled for Saturday, June 7 to coincide with New York State’s first Path Through History Weekend of 2014.

As it has for nearly twenty years now, the bus tour will feature renowned architect Robert Dadras and the Sullivan County Historian as narrators, and will cover both architectural and historical highlights of a selected portion of the county, this year including, among others, the Minisink Battleground and the Woodstock site, the Fort Delaware Museum of Colonial History and the Museum at Bethel Woods, perfectly illustrating the Revolution to Revolution concept.

And as always, the bus tour will include a number of stops and a luncheon reception.  One difference this year is that unlike in the past when there were two separate but identical trips, one in the morning and one in the afternoon, there will be just one trip this time, beginning at 9 AM.  By eliminating one of the trips, organizers are able to pack more into the day, including tours of both Fort Delaware and the Museum at Bethel Woods.

Photo of the Fort Delaware Museum of Colonial History in Narrowsburg, NY by Debra Conway.