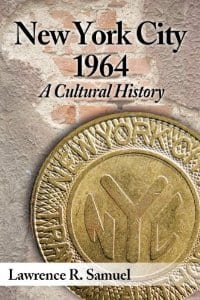 Five seminal events occurred in New York City in the pivotal year 1964: the “British Invasion” arrival of the Beatles in February; the murder of Kitty Genovese in Queens in March; the World’s Fair in Queens between April and October; the “race riots” in Brooklyn and Harlem in July; and the World Series in the Bronx between the New York Yankees and the St. Louis Cardinals.

Through an exploration of these landmark events – the biggest thing in pop culture since Elvis’s appearance on The Ed Sullivan Show, a shocking crime that reportedly went ignored, the last great world’s fair, a key moment in the Civil Rights Movement, and a legendary championship game that marked the end of an era – readers will have a better understanding of the social turbulence in New York City and the United States in the mid-1960s.

Author Lawrence R. Samuel is the founder of Culture Planning LLC, a Miami- and New York-based resource offering cultural insights to Fortune 500 companies. He holds a Ph.D. in American Studies and an MA in English from the University of Minnesota, an MBA in Marketing from the University of Georgia, and was a Smithsonian Institution Fellow. He is also the author of more than a dozen books.