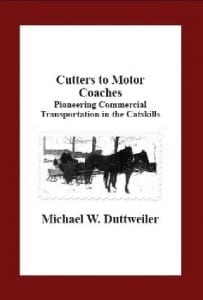 A new book, Cutters to Motor Coaches: Pioneering Commercial Transportation in the Catskills (Fast Pencil, 2014) by Michael W. Duttweiler explores the evolution of commercial motorized transportation in rural Western Sullivan County, New York through the story of a family business.

Along the way, it outlines major phases in the history of Sullivan County tourism, influences of the Ontario and Western Rail Road, and changes brought about by increased regulation of commercial transportation, the Great Depression, and World War II.

The story is situated in Jeffersonville, New York about which selected aspects of early history and the local economy are included. The book primarily covers 1910 to 1945 with more than 100 period photos and documents supplementing the well-documented narrative.

Michael Duttweiler, a career-long adult educator, has long-standing interest in local history of the Catskill Mountains and other regions of New York. He was raised in Jeffersonville, Sullivan County, New York and lived there through his undergraduate years. He is a three-time graduate of Cornell University holding bachelor’s and master’s degrees in natural resources and a doctorate in education.

Now retired, he lives with his family in Ithaca, New York. He has a deep love for the natural areas of New York State, including the Catskills and the Finger Lakes Region that has been his home for more than forty years.