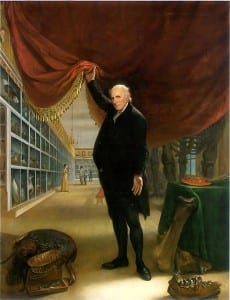 I value the National Endowment for the Humanities (NEH). I have been a grant review panelist and recipient of grants. Indeed Acting NEH Director Andrea Anderson was the program officer I worked with 30 years ago on “The Great River: Art & Society of the CT Valley” (1985). Without NEH, that project would have been impossible.

I have always had a passion for local history and small museums and especially house museums. I started out in one in Vermont in the 1970s. I am not one who thinks there are “too many house museums.” I think there is too little equity in the way public funds and private foundations involved in the arts and humanities are distributed. I am concerned that too little of that support reaches down to that half of the museum industry comprised of organizations that are small.

I wish that NEH would give some deep thought how we might engage and be of more use to the thousands of community-based public history organizations that constitute the grassroots presence of the humanities in public life – on the ground, authentic, localized, deep and inspirational – not only because it’s the right thing to do – but because in so doing, NEH and the state humanities councils could extend their reach into thousands of places (and Congressional districts) that are not being reached now. There are literally thousands of communities – many small and rural – where the town library and historical society are it – the only places in their communities where the public humanities live.

I’ve been involved in a campaign under the banner of “Our History Matters!”. One of the things we’re grappling with is how to discern and disseminate ideas that communicate the vital message that civics, history and the humanities are essential to the prosperity, governance and well-being of this country. Not to get into a discussion about No Child Left Behind or Common Core – but if civics and history aren’t tested, they are marginalized, and that’s bad for America – unquestionably.

So, what are we doing to make the case for this work?

Here are excerpts from the American Academy’s recent “Heart of the Matter” initiative. Some good folks like Ken Burns got involved, and there are some compelling arguments here.

David McCullough has been an outstanding champion. Here are excerpts from his interview on “60 Minutes”.

But it’s still mainly an argument that focuses on History with a capital H – national more than local, great men more than every man (and woman), big events rather the common flow of everyday life and contexts – missing the power of place and locale entirely.

This case study that represents why I jump out of bed every morning to keep championing the cause of the humanities and local history: https://www.youtube.com/watch?v=6gpSBj1iktk

Organizations like the volunteer-run Winchester Historical Society represent strata of excellence largely untouched by the state and national arts and humanities grant agencies.

It matters because they matter – but also because if we want to keep the good work the NEH does as a funding priority in Congress, wouldn’t it be incredibly useful if the hundreds and thousands of volunteers, trustees and staff at small museums knew that public funding for the humanities was accessible to them and more equitably distributed?

And wouldn’t it be so much better if they knew that NEH valued what they do?

It’s not just the big museums that deserve funding – but the small historic house museums, who often lack the staff to wade through the grant application process and to polish their applications to the same standards as trained development staff at the big institutions. That does not mean they aren’t capable of envisioning excellent projects and programs. And they almost always deliver more bang for the buck, precisely because they are small and don’t have layers of costly administration. Small is the new big, but this message is still largely lost in the corridors of public public money for the arts and humanities.

If there was one thing left I could do (now that I am 59) – it would be to facilitate and participate in a discussion that doubles down – not just on why the local matters – it surely does – but how the systems we have are essentially unscalable for small. We can’t learn local if the local content is struggling.

The first thing I would do is be rid of the matching requirements. They clearly favor organizations with professional fund-raising and development staff. Its good to create incentives and you could still give extra points for matching – but to require it immediately eliminates most small museums. The second thing – allocate more of what’s available – in units of $5 to $25k – for worthy projects of their choosing. I suppose need is a politically impossible thing to consider – but when I see the enormous amount of money being shoveled into a very few elite projects and programs – they don’t need NEH money. The third would to be simplifying grant procedures.

Bill Hosley of Connecticut is a longtime public humanities scholar, museologist, preservationist and practitioner – now a consultant – who, among other things, has visited, lectured at and studied more than 1,000 mostly small, mostly community-based historical organizations – all over the country but mostly in the Northeast. Check out his Youtube Channel.