As part of the ongoing commemorations of the bicentennial of the War of 1812, this special issue of the journal New York History focuses on New York State’s key role in that conflict. In the early nineteenth century, New York occupied an important strategic position in North America.

As the newly independent United States defined and expanded its borders, it clashed with Native peoples and Great Britain, which continued to have a strong presence on the continent despite the losses of the American Revolution. With the onset of the War of 1812, New York became a central battleground in the ongoing contest for dominance in North America.

Many of the war’s most important engagements took place on New York soil: Ogdensburg (1812, 1813), Sackets Harbor (1812, 1813), Black Rock (1813), Buffalo (1813), Fort Niagara (1813), Big Sandy Creek (1814), and Plattsburgh (1814), arguably the most important battle of the war. The conflict touched every part of the state. Western New York served as a staging ground for crucial battles on both sides of the Niagara frontier. On the state’s northern and eastern borders, naval clashes between Great Britain and the United States took place on Lakes Ontario, Erie, and Champlain. To the south, part of Great Britain’s Navy blockaded New York Harbor, seized cargos from ships leaving Sag Harbor, and raided Gardiners Island and Riverhead, Long Island. 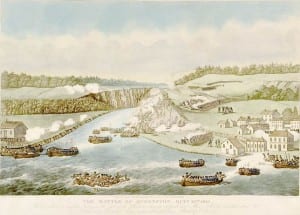 This special issue examines the war in New York State from multiple angles—military, political, diplomatic, and economic. It includes explorations of interesting primary sources from the period and offers useful essays for educators who are seeking to incorporate the history of the war into their classrooms. It also contains an extensive book reviews section, which features new works on New York and the War of 1812.

Read the Editors’ Introduction for free here and subscribe to New York History to read the entire issue.

Failure at Queenston Heights: The Politics of Citizenship and Federal Power during the War of 1812 by David Dzurec

Terror Weapons in the Naval War of 1812 by Andrew J. B. Fagal

Militia, Mud, and Misery: Sackets Harbor During the War of 1812 by Gary M. Gibson

Schemers, Dreamers, and a Revolutionary Foreign Policy: New York City in the Era of Second Independence, 1805-1815 by Lindsay Schakenbach

Teaching the War of 1812: Curriculum, Strategies and Resources by Douglas Kohler

Sources for Social Studies Instruction: The War of 1812 by Lawrence M. Paska

Book Reviews: New Books on New York and the War of 1812

Smith, The Slaves’ Gamble: Choosing Sides in the War of 1812
REVIEWED BY SEAN KELLEY

McCranie, Utmost Gallantry: The U.S. and Royal Navies at Sea in the War of 1812
REVIEWED BY CALEB KLINGER

Daughan, The Shining Sea: David Porter and the Epic Voyage of the U.S.S. Essex during the War of 1812
REVIEWED BY KEVIN SCHARLAU

Herkalo, The Battles at Plattsburgh: September 11, 1814
REVIEWED BY JARED LOBDELL

The Iroquois Trail of Tears: From Protectors of the Peace to Removal from Ancestral Lands

Rhoades, Long Knives and the Longhouse: Anglo-Iroquois Politics and the Expansion of Colonial Virginia

Tiro, The People of the Standing Stone:  The Oneida Nation from the Revolution to the Era of Removal

Dring, Recollections of Life on the Prison Ship Jersey in 1782
REVIEWED BY DEBRA JACKSON

Dunham, Allegany to Appomattox: The Life and Letters of Private William Whitlock of the 188th New York Volunteers
REVIEWED BY RYAN C. BIXBY

Blackett, Making Freedom: The Underground Railroad and the Politics of Slavery
REVIEWED BY CHRISTOPHER ALLEN VARLACK

Purnell, Fighting Jim Crow in the County of Kings: The Congress of Racial Equality in Brooklyn
REVIEWED BY ANDREW J. FORNEY

Illustration for this post: The Battle of Queenston Heights, by James B. Dennis. Courtesy the Library and Archives Canada.