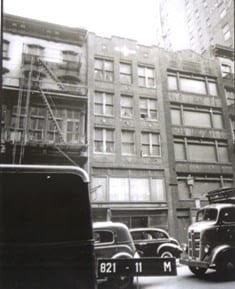 51 and 53 West 19th Street are five-story, residential buildings built in 1854 which were converted to commercial and/or manufacturing use in the 1920s. Such a history is very much in keeping with the Ladies’ Mile Historic District. In fact, the designation report lists “converted dwellings” as a building type in the district along with “residential construction”, “office buildings”, “store and loft buildings”, and “retail stores/department stores.” The report points out that after World War I, the shopping district had moved north and the area’s focus shifted to manufacturing. The 1916 zoning resolution had prohibited the construction of tall buildings on mid-block sites, and so instead the surviving residential buildings were converted. Converted dwellings are obviously a part of the fabric of the district, and these two nicely-designed buildings are good examples of this typology.

To be fair, the two buildings have both seen better days and appear the worse for wear due to long-deferred maintenance. On the other hand, the proposed replacement is no prize either, but even discussing its lack of virtues is beside the point: preservation is not a beauty contest.

The existing buildings at 51 and 53 West 19th Street are historically significant buildings which contribute to our greater understanding of New York City’s history that are protected under the Landmarks Law. Permitting the demolition of a landmark building is an extreme and final act. Historic buildings may be renewable but they are not replaceable – once they’re gone, they’re gone forever. Proposing to demolish them says that these buildings have no value, that they have no more use and that the best and only future for them is no future at all.

Fortunately, the Landmarks Preservation Commission (LPC) already has precedent for the retention of historic buildings that reflect the character of their district.* In 2010, the LPC denied an application at 558 Broadway in the SoHo-Cast Iron Historic District which would have destroyed the garage building’s 1920s decorative brick façade. The applicant tried to argue that the building did not reflect the 19th-century feel of the district and so could be radically redesigned. Commissioners roundly disagreed, pointing out that the building was designated as part of the historic district and its destruction was “a non starter.”

In 2012, the LPC saw a proposal for the demolition of 70 Henry Street, a one-story, 19th-century building much altered over the decades in the Brooklyn Heights Historic District. Commissioners debated the amount of historic fabric that would be lost and in the end, could not approve of such destruction. Since then, the applicant has been working on a proposal to retain the structure as the base for a new building.

Historic districts see change constantly – the LPC issued over 10,000 permits for alterations to landmark buildings last year alone, and when one considers that the LPC regulates only 30,000 buildings throughout the whole city, that’s a surprising amount of change being permitted.

At the same hearing today, there is a request to demolish one-story a much-altered 1920’s building in the Greenwich Village Historic District to replace it with a new building, and you know what? HDC supports that proposal.

The difference? 51 and 53 West 19th Street are clearly buildings whose history, design and materials are important parts of the Ladies’ Mile Historic District. Their loss would be a detriment to the district and pave a dangerous path for the loss of many other protected buildings throughout the city. If these buildings are allowed to be torn down, it will set a terrifying precedent for every historic building in New York not built out to the fullest potential of its zoning.

Please contact Chair Robert Tierney at comments@lpc.nyc.gov and tell him the Landmarks Preservation Commission must deny this proposal in order to protect the landmarks of New York City.