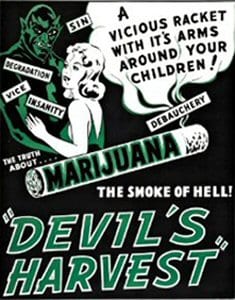 It’s that time of year again, when 420 events are in the news. The war on drugs that began in the late 1960s and early 1970s has been declared a failure by many officials, a sentiment echoed in recent years by the Global Commission on Drug Policy. But America’s war on drugs (if you don’t count Prohibition) began in the 1930s with the focus on marijuana.

The principal salvo in the new war was 1937’s Marihuana Transfer Tax Act, which placed strict controls on the growth and use of hemp. Many states adopted their own restrictive laws. At that time, the North Country was a pot-lover’s paradise―except that there weren’t that many pot lovers in the area to enjoy it.

With new rules in place, lawmen immediately began literally weeding out this nefarious plant that was destroying society (according to dubious … perhaps “doobie-ous” is more appropriate … testimony before Congress).

Newspapers across the Adirondacks touted the government’s position: “For some time, authorities failed to realize what ravages were being worked by this innocent-looking weed. It was only when the increasing number of insanity cases due to the drug were discovered, and an analysis of crime traced much of the violence to such addicts, that steps were taken to curb its use.

“Marijuana is dangerous not only because of its effect on an individual’s health, but also because it causes industrial unrest, sex crimes, and overt acts of various kinds. … Its continued use produces pronounced mental deterioration in many cases. … Those who indulge in its habitual use develop a delirious rage after its administration, during which time they are temporarily irresponsible and commit violent crimes.

“The menace of marijuana was not known to the general public until a few years ago when it was discovered that reefers were being peddled outside schoolhouses in various parts of the country. … In Chicago, Miss Ethel Schiller, a sociologist in the courts, said 60 percent of juvenile delinquents were victims of marijuana. A prosecuting attorney in New Orleans attributed 50 percent of the murders committed there to reefers.”

I’m not sure where those New Orleans murderers were getting their supply, but the pot of the 1960s and the ensuing decades was known to cause lethargy and silliness. Under the influence of marijuana, the closest thing to a fight, let alone a homicide, was a snack attack. In such a laid-back state, one usually has little inclination to fight, steal, or … move. Yet pot was blamed for two main things: causing youths to commit crimes, and spawning a generation that lacked motivation to do just about anything. Go figure.

And now to that pot-lover’s paradise I mentioned earlier. When the war on marijuana erupted in the late 1930s, North Country lawmen were extra busy. Within a year of the law’s passage, the take was huge, including in Albany (50,000 plants), Clintonville (2500 pounds of plants), Keeseville (four acres of weed), Lake Placid, Ogdensburg (300 pounds of plants), and a host of other communities. 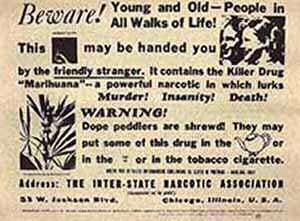 Huge patches of marijuana were discovered, hacked to pieces, and incinerated. Finding such massive quantities of a drug vilified as the source of society’s downslide, one can imagine the dozens, perhaps hundreds, of arrests that followed.

But … what’s this? No one was convicted? Hell, no one was even charged, and for good reason. In each of those cases above, lawmen confirmed that these were wild, non-cultivated plants. That’s right―pot had grown and spread unchecked, like the weed it is.

In farmers’ fields, in villages, and in vacant city lots, the stuff was everywhere. Although marijuana was somehow devastating the nation’s moral fiber, most people had no idea what it looked like. It was so ubiquitous that it took police and drug enforcement agencies years to minimize its presence.

North Country citizens had walked among marijuana for years without knowing it. Some saw it as a nuisance plant; some thought its foliage had decorative qualities; and some thought it was an unusual growth sprouting from bird seed. But for those in the know, it was a pot-lover’s paradise.

Not everyone was happy with the new law, though. In 1939, it was reported that Utica’s pigeons were “on strike.” The new federal law required that all hemp be baked three times to ensure that the THC (tetrahydrocannabinol, the active ingredient) was removed. But the pigeons were having none of it.

Said the Plattsburgh Sentinel of the birds on strike: “They’re eating kaffra corn, buckwheat, whole red wheat, and Canadian peas—but no hemp. No compromise is in sight.”

Photo: Anti-marijuana advertisements by the federal government in the 1930s.