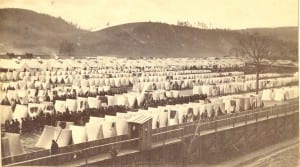 The Chemung Valley Living History Center will host the 150th Anniversary Commemoration of Camp Chemung (the Civil War Prisoner of War Camp in Elmira, NY) on May 3rd and 4th, 2014.

The event will include a re-enactment on the actual camp ground in Elmira.

Elmira Prison was a prisoner-of-war camp constructed by the Union Army to house captive Confederate soldiers. During the 15 months the site was used as a prisoner of war camp more than 12,100 Confederate soldiers were incarcerated there; of these, nearly 25% (2,963) died from a combination of malnutrition, continued exposure to harsh winter weather, and disease from the poor sanitary conditions on Foster’s Pond combined with a lack of medical care. The camp’s dead were prepared for burial and laid to rest by the sexton, an ex-slave named John W. Jones, at what is now Woodlawn National Cemetery. At the end of the war, each prisoner was required to take a loyalty oath and given a train ticket home. The last prisoner left the camp on September 27, 1865. The camp was then closed, demolished and converted to farm land.

Woodlawn Cemetery, about 2 miles north of the original prison camp site (bounded by West Hill, Bancroft, Davis, and Mary streets), was designated a National Cemetery in 1877. The prison camp site is a residential area today, and few of the city’s residents are aware that the prison camp ever existed. However, there is a memorial at the site today.

Parking and entrance to the event will be from the Grove Street Boat Lauch area in Elmira. No other information has been released about this event. There is a website with information for reenactors, but it is of little value to visitors to the event.