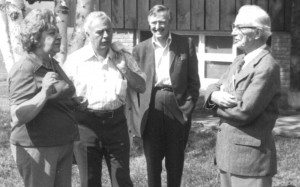 The governor chose that date because it coincided with a memorial service to the late Mrs. LaRose at the Fort George Battleground Park on the Beach Road at Lake George. This was an appropriate site for the service because Winnie, more than anyone else, was responsible for turning this swampy piece of ground into a park for people to enjoy. But it was done not only for people. As Victor Glider, a good friend and now retired as director of Environmental Conservation Field Services, told the gathering, Winnie insisted on clearing away the brush so that the statue of the martyred Father Jogues would have a good view of the lake where he served his mission in the 17th century.

“If it hadn’t been for Winnie’s constant efforts to see that park completed,” said Mr. Glider, “it would probably still be in the clearing stages.”

Those of us who knew Winifred LaRose during the past 30 years were not surprised by Glider’s comment. DEC Commissioner Robert Flacke had a lot to do with arranging the services and establishing a memorial plaque on the site honoring Winnie. He observed that when Winnie considered her cause as just, no one, no matter “how high up in government or how low on the totem pole” was immune to her pestering. 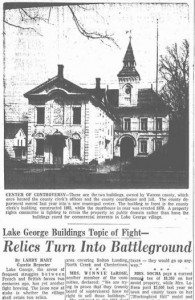 My earliest recollection of Winnie LaRose was about 1958 when a building that had been the Warren County Court House in Lake George was to be demolished. As president of the Lake George Historical Society she succeeded in a campaign to preserve the building as a museum of local history. Winnie was an active business woman and at the time was a director of the Lake George National Bank. But she found the time and energy to make this her cause, and the building, an architectural classic of the 19th century is, in a way, another monument to her.

In October 1971, Carl George, a professor of biology at Union College, chairman of the northeastern chapter of the Nature Conservancy, asked Paul Schaefer to help form an Adirondack Chapter. A meeting was set on the Union campus and Paul asked Winnie to draw up a list of those to be invited. I was fortunate to be on the list and the meeting was historic. Out of it came The Adirondack Nature Conservancy which has since put thousands of formerly privately owned Adirondack acres under protection against random development. Winnie was from the beginning the membership director of the group and on its executive committee.

When Governor Rockefeller appointed the Temporary Commission to Study the Future of the Adirondacks, he named Winnie as a member of its advisory committee, not only for her dedication to the protection of the environment but for her wide knowledge of the region which the commission was to study. Her honors have been many. In 1969, she received the New York State Conservation Council’s award. She was Woman of the Year, so named by the Lake George Business and Professional Women’s Club in 1970 and Citizen of the Year by the Lake George Rotary Club. 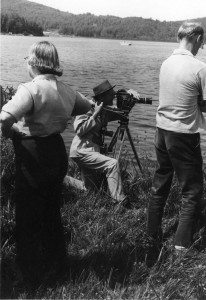 During the past year and a half, Winnie was active with Paul Schaefer in producing the film, “The Adirondacks, the Land Nobody Knows.” The film has enchanted everyone who has seen it, and it beautifully reflects the mountains and valleys, the lakes and streams, which Winnie loved so much.

In the month before her death, Winnie was able to chalk up another significant victory. The voters supported the constitutional amendment which enabled the state to exchange forest preserve land in the so-called Perkins Clearing with International Paper Co., a cause in which Winnie was very active.

Barney Fowler, staff writer for the Albany Times Union whose beat was the Adirondacks, wrote that he was shocked by the news of her death. His tribute to her in his column commented that “she packed a considerable clout when she got involved. She proved an aggressive, tireless and good fighter.”

None of us who knew and worked with Winnie LaRose feel we have done enough, or ever will do enough to honor her memory. She was a tough, uncompromising, effective and totally dedicated environmentalist. Some of us would like to mark every August 21 from now on as a reminder to our children and our children’s children of the importance of the ideals and values which Winnie LaRose represented.

Robert F. Hall (1906-1993) owned a chain of weekly Adirondack newspapers that included the Warrensburg-Lake George News, the Hamilton County News and the Lake George Mirror. In 1962, he created Adirondack Life as a supplement to his weekly papers. He served on Governor Nelson Rockefeller’s Temporary Study Commission on the Future of the Adirondacks and was named editor of The Conservationist Magazine in 1971.

This essay is republished with the permission of his family as part of The New York History Blog‘s project to highlight the history of women in New York State for Women’s History Month.