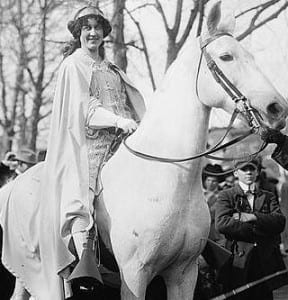 Already known for “making suffrage fashionable,” Inez Milholland shot to fame as the herald atop a white horse at the head of the March 3, 1913, suffrage procession in Washington, DC. It was a shock to the world when a few months later the New York Times announced that Inez had met Hollander F. Eugene Boissevain aboard an ocean liner and married him in London.

Inez said that she had to propose to Eugen three times before he agreed. She thought that all women should propose if they “realize the affinity of heart and soul.” Of course, she admitted that the woman’s motives may be misinterpreted but “the little risk is more than outweighed by the big gain.”

Not even Inez’s father had any idea that she was planning to marry or even being courted by Boissevain. “It came like a bolt out of the blue,” said John Milholland. “Never saw him. Never heard of him in my life.”

Marriage did not halt Inez’s suffrage work. She set out on a cross-country trip campaigning for support of a federal suffrage amendment in 1916. By the time she reached California, Inez was exhausted and terribly ill. She wrote to Eugen that she was anxious to return home and start a family. Those plans never materialized. Inez collapsed during a speech and was taken to a hospital where she required several blood transfusions. She died, at the age of 30, on November 25.

Inez became the martyr of the American suffrage movement. A depiction of her on a white horse leading the 1913 parade became an emblem of the National Woman’s Party (NWP). Four years after her death, on August 26, 1920, the 19th Amendment gave women the vote.

To celebrate the victory, the NWP commissioned a sculpture of Susan B. Anthony, Elizabeth Cady Stanton, and Lucretia Mott. Artist Adelaide Johnson created the massive “Portrait Monument” out of white Carrara marble. On February 15, 1921, the 101th anniversary of Anthony’s birth, the group statue was unveiled in the Rotunda of the United States Capitol. Shortly after the celebration, the statue was escorted down to a first floor room, later known as the Crypt.

Two years later, the NWP held an Inez Milholland memorial celebration at the statue in the Capitol and invited poet Edna St. Vincent Millay to participate in the event. For Edna, the memorable day added to a year of remarkable days.

In early April of 1923, Eugen Boissevain and Edna were paired in a game of charades at a friend’s house. They instantly fell in love, he took her to his home that evening, and she never left. He nursed the feeble and ill Edna and took charge of her medical treatments. Crohn’s disease was winning over her body and her mind became too weak to even write poetry.

The poetry that she had already written gained her notoriety. In late April, Edna received word that she had been awarded the Pulitzer Prize in Poetry for 1922 — the first woman to win the prize in poetry. Meanwhile, Eugen took her to New York City to the best internists and surgeons to try to heal her illness. It was decided that surgery was required, but Edna and Eugen decided that nuptials should come before the knife.

On the morning of July 18, Edna St. Vincent Millay married Eugen Boissevain at Croton-on-Hudson. After the ceremony, they drove into New York City where Edna entered the hospital for surgery. Just before she went into the operating room, she said to a friend, “Well, if I die now, I shall be immortal.”

The operation was successful but left Edna very frail and weak. However, when she was invited to compose and deliver the dedicatory sonnet at a National Woman’s Party event, she accepted. The fact that the event was also a memorial celebration for Inez Milholland probably spurred her energy. Not only had Edna married Inez’s widower, but she had been an admirer of Inez at Vassar and thought of her as a “great suffragist.”

After attending the ceremony, Edna wrote to her mother:

Forgive my long silence.—I am just recovering from my annual bronchitis!—I “went up to London to see the Queen”—that is, I went down to Washington to see the President—with a whole bunch of suffragists—also to read a poem which I had written, at a conference thingumajig in the Capitol—I enclose the poem…& I caught cold on the train–& here I am,… somehow, ever since my operation, I catch cold twice as easy…

Edna’s “bunch of suffragists” went to Washington to celebrate the 75th anniversary of the women’s rights movement. Evidently, Edna went with a delegation of about 200 people to “see the President” the day before the ceremony. They presented a program for new legislation which was written by Alice Paul and became known as the Equal Rights Amendment (ERA). 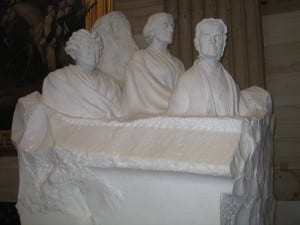 The event that Edna called the “thingumajig at the Capitol” was the picturesque ceremony held on Sunday, November 18, 1923, at the base of the statue of the pioneer suffragists. The Crypt came alive as it filled with fragrant evergreens, organ music, and choir voices singing “Forward out of error, Leave behind the night, Forward out of darkness, Forward into Light.” In addition to Millay, several NWP delegates from New York State attended, including Mrs. O. H. P. Belmont, Mrs. Jan Boissevain, Inez Irwin, Adelaide Johnson, and Doris Stevens.

The “poem” that Edna read is the sonnet “The Pioneer,” which encouraged women to continue to fight for equal rights. It is unclear if Edna wrote the lines about Anthony, Stanton, and Mott (the pioneers in the marble statue) or about Inez — or about all of them. However, by 1928, Edna had retitled the sonnet “To Inez Milholland.”

Upon this marble bust that is not I
Lay the round, formal wreath that is not fame;
But in the forum of my silenced cry
Root ye the living tree whose sap is flame.
I, that was proud and valiant, am no more; —
Save as a wind that rattles the stout door,
Troubling the ashes in the sheltered grate.
The stone will perish; I shall be twice dust.
Only my standard on a taken hill
Can cheat the mildew and the red-brown rust
And make immortal my adventurous will.
Even now the silk is tugging at the staff:
Take up the song; forget the epitaph.