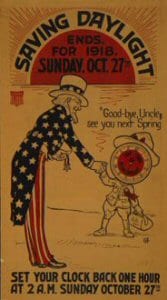 Described here is a real-life scenario that was once possible. The timeline might be tough to follow, but it’s early May, and we’re strolling down the main street of a North Country community, running several errands. First stop: the Peoples Bank, where we make a deposit and then exit at exactly 1:15 pm. Down the street, we stop at the Citizens Bank to open an account, but the sign on the door says they’re closed for lunch until 1 pm. Glancing inside the restaurant next door, we see several bank employees eating lunch beneath a wall clock that says 12:20 pm. Rather than wait, we move on.

Down the street, we pick up a few items at the US Brush Company, leaving there at 1:30 pm. Next stop: the post office, to buy some stamps. But the door is locked. On the knob hangs a sign stating that the clerks will return at 1 pm.

Off we go to the nearby grocery, picking up a few items and exiting the store at 1:40 pm. Just a few doors down, we stop at the Star Theater to pick up tickets for tonight’s play. But the ticket window hours are 1–4 pm, and the clock inside says 12:45 pm, so we move on to the Muslin Underwear Company and buy a new supply of unmentionables.

Leaving there at 2 pm, we retrace our path to the Citizens Bank, which has just reopened for business after breaking for lunch. The large clock above the bank door says 1:05 pm.

After several more stops, we pick up the children at school at exactly 3 pm. Down the road a bit, we board the 2 o’clock train and return to our home in a nearby village. The 4-mile train ride, which began at exactly 2 pm, ends without incident at 3:10 pm.

At 5 pm, the day’s steaming hot supper is ready. The father of the house works in a factory 50 miles away. He was released from work at 5 pm, completed the 50-mile trip home, and was seated at the supper table at exactly 5 pm.

However implausible it seems, many of those events (or their equivalent) once happened frequently in everyday life. How could that be? Well, unlike references to changing times, this involves the literal changing of times, something that occurs annually, and just took place again a couple of weeks ago.

It was all part of the bungled mess of rules and regulations governing daylight saving time, which today is used by all states except Arizona and Hawaii. The Act of 1918 made it the law of the land to save energy during WWI. When the war ended, President Wilson wanted the practice continued, but Congress repealed it. Wilson vetoed the repeal, and Congress overrode his veto.

Toss in another issue—the ever-popular argument for states’ rights—and the unforeseen result was chaos. The states’ right to choose was honored, and choose they did. Some opted for daylight saving time, while others didn’t. The first victims: travel schedules and delivery times. Having four distinct time zones in the country was one thing, but this was something else entirely.

It became possible to board a train near a time zone, travel perhaps 20 miles, and arrive at your destination a half-hour earlier than when you left. Good for the traveler, sure, but not so good for schedulers, who faced a logistical nightmare. A train going 50 miles west might leave at 3 o’clock, only to arrive at its destination an hour later and find it was still 3 o’clock, while one going 50 miles east from the same point might leave at 3 and arrive at 5.

Ahhh, but that was just the tip of the proverbial iceberg. The issue of states’ rights was about to make the situation much worse. Legislatures had the ability to choose, and accordingly, some of them (New York’s included) passed that same right on to cities, towns, and villages. Since no single law limited people’s choices, individual businesses opted in or out at their own discretion.

Choices made at every level resulted in the scenario described above, which was a lovely jaunt on the streets of Potsdam in spring 1920. In that village, one bank chose daylight saving, so while they served customers at 1:15 pm, their nearby rival on standard time was only 15 minutes into the lunch hour.

In 1920, trains were the principal mode of scheduled transportation. When they opted for standard time, the postal service and courier companies, which used used rail service, made the same choice.

When the Potsdam schools chose daylight saving, families with school-age children followed suit. But in a household with schoolchildren, if the father worked at a business operating on standard time, home lives were upset by different schedules for meals, sleep habits, and daily activities. It was a real mess. And remember, Potsdam is just an example of what happened across New York.

States’ rights might be wonderful for many things, but this clearly wasn’t one of them. Of course, with the bedlam caused by “time anarchy” in the early 1920s, it goes without saying that common sense led to the establishment of a national policy, right?

If only it were so. In reality, the confusion continued for decades. During WWII, order returned when a national policy was once again instituted, but at war’s end, what do you think we did? That’s right … the same as after WWI: everyone chose their time option and ran with it.

This went on in varying forms into the late 1960s, when Congress passed the Uniform Time Act. States were given the option of choosing daylight saving time, and if they did, the entire state had to comply. Further, only the federal government could determine the dates of each year’s time changes.

Mind-boggling, isn’t it, that a country priding itself on pioneering multiple technologies and being a world leader could sink into such a morass of bad decisions for so long.

Actually, it was nothing more than a portent of the future. It’s no surprise that our politicians today can’t come together on even the simplest of decisions. After all, for half a century, they couldn’t even agree on what time it was.