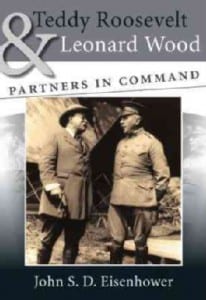 For the remainder of their lives, the careers of T.R. and Wood would intertwine in ways that shaped the American nation. The late John S.D. Eisenhower’s Teddy Roosevelt and Leonard Wood: Partners in Command (University of Missouri Press, 2014) is a revealing look at the dynamic partnership of this fascinating pair and will be welcomed by scholars and military history enthusiasts alike.

When the Spanish American War came, both men seized the opportunity to promote the goals of American empire. Roosevelt resigned as assistant secretary of the navy in William McKinley’s administration to serve as a lieutenant colonel of the Rough Riders, a newly organized volunteer cavalry. Wood, then a captain in the medical corps and physician to McKinley, was promoted to colonel and given charge of the unit.

Roosevelt later took over command of the Rough Riders. In the Battle of San Juan Hill, he led it in a charge up Kettle Hill that would end in victory for the American troops and make their daring commander a household name, a war hero, and, eventually, president of the United States.

At the Treaty of Paris in 1898, Spain ceded Cuba, Puerto Rico, Guam, and the Philippines to the United States. The next year, Wood became military governor of Cuba. He remained in the post until 1902. By that time Roosevelt was president. One of the major accomplishments of his administration was reorganization of the War Department, which the war with Spain had proved disastrously outdated. In 1909, when William Howard Taft needed a strong army chief of staff to enforce the new rules, he appointed Leonard Wood.

Both Wood and Roosevelt were strong proponents of preparedness, and when war broke out in Europe in August 1914, Wood, retired as chief of staff and backed by Roosevelt, established the “Plattsburg camps,” a system of basic training camps. When America entered the Great War, the two men’s foresight was justified, but their earlier push for mobilization had angered Woodrow Wilson, and both were denied the command positions they sought in Europe.

Roosevelt died in 1919 while preparing for another presidential campaign. Wood made a run in his place but was never taken seriously as a candidate. He retired from the army and spent the last seven years of his life as civilian governor of the Philippines.

It was a quiet end for two men who had been giants of their time. While their modernization of the army is widely admired, they were not without their critics. Roosevelt and Wood saw themselves as bold leaders but were regarded by some as ruthless strivers. And while their shared ambitions for the United States were tempered by a strong sense of duty, they could, in their certainty and determination, trample those who stood in their path.

Author John S. D. Eisenhower was a U.S. Army general and military historian who served as the United States Ambassador to Belgium from 1969 to 1971. He was the author of many books, including They Fought at Anzio (University of Missouri Press), The Bitter Woods, and Yanks.

Book purchases made through this Amazon link help support this site.  Books noticed on New York Almanack have been provided by their publishers.