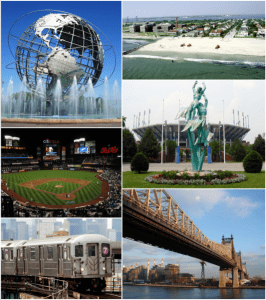 Where is the U.S. (Tennis) Open played? The tournament is located in the borough of Queens but people are more likely to think Flushing. The Brooklyn Dodgers and the Bronx Bombers are named or nicknamed for their borough, the Mets and the Jets (when they were in New York) are not. Letters to New York have borough names in the mailing address except for Queens. They are addressed to Forest Hills where the U.S. Open used to be played or to Astoria, Bayside, Long Island City and so on.

At a recent conference on Quintessential Queens held at Queens College, former Queens resident Nicole Steinberg, in a talk entitled “Many a Neighborhood – Astoria to the Rockways”, identified 74 different neighborhoods in the borough. While all of them might not have their own postal address, the large number highlights the problems: people in the borough may identify with their neighborhood the same way someone outside New York City identifies with a village, town or city and not with their county. In other words, Queens has an identity problem.

I’m a bit of a history buff and I love nice architecture and greenery. That’s why I hoof the “Flushing Historical Loop.” The Kingsland Homestead (143-35 37th Ave.) is a great place to start. This 1785 beauty houses the Queens Historical Society and features a gambrel roof, Dutch-style front door and a Victorian feel. From there, it’s a pleasant hop-skip-and-jump to the John Bowne House (37-01 38th Ave.), which dates back to the 1660s and has a legitimate claim to being the birthplace of the Flushing Remonstrance, a petition for religious freedom that influence the framers of the Constitution. From there, I can cruise to the Voelker Orth Museum (149-19 38th Ave.) and check out the bird sanctuary, Victorian garden, beekeeping hives and migrating birds. The trip ends at the Lewis H. Latimer House (34-41 137th St.), where a brilliant African-American inventor lived, and Flushing Town Hall (137-35 Northern Blvd.), an 1862 Romanesque Revival mansion with a beautiful garden and fascinating history.

This Flushing loop would make an excellent Path through History if that state project was designed to promote actual paths.

Here one observes the challenge facing organizations such as the Queens Historical Society, the Queens Borough Public Library, the newly renovated and renamed Queens Museum, and Queens College. 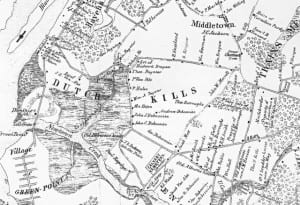 How does one develop a borough identity in a borough of multiple named-neighborhoods where travel between them is difficult. The mass transit lines are better at feeding people into and out of Manhattan than within Queens itself.

The aforementioned Quintessential Queens conference (held in October 2013), was one such effort to embrace a borough perspective. The invitation to participate implied some of the challenges Queens faces.

Standing alone, the borough of Queens would be America’s fourth largest city. Yet, as one of New York’s five boroughs, it doesn’t always receive the recognition it deserves for its vitality, diversity, and cultural heritage. Quintessential Queens: Celebrating America’s Fourth Largest City is an all-day conference that celebrates both this remarkable borough and the 75th anniversary of one of its most important institutions, Queens College of the City University of New York.

Queens College has long been among the intellectual and cultural centers of this borough of more than two million people. Quintessential Queens will gather academics, government employees, college and high school students, and the public to learn about the place of Queens in the world, the nation, and the city. Lectures will cover the borough broadly, including the evolution of Queens and its defining events, its landscape and natural places, its demographics, its neighborhoods, its long history of welcoming immigrants, and its place in literature and popular culture.

The conference addressed the ecological setting of the borough, it’s history, arts, culture, demographics, and the future of the borough. At my suggestion, historical organizations were invited to set up display tables and many did.

Now what? Do we wait another 75 years for Queens College to host another conference? Jack Eichenbaum is the Queens Borough historian. He has (along with the new Borough President and the Cultural Affairs and Tourism Department) the possibility of having an annual conference. He already leads numerous walking tours in different parts of the borough which have taken a toll on his knees. He is now offering a summer session class in June, too early for teachers to take, at Queens College entitled “Queens Off the Books.”

Queens even has an app “This Is Queens.” The explore panel suggests customized tours. For example, “A Taste of Hollywood in Queens” includes Kaufman Astoria Studios, the Museum of Moving Image, and Silvercup Studios. Perhaps the home of Archie Bunker could be added (he was mentioned several times during the Quintessential Queens conference).

One possible coalescing event which could occur this year is the 50th anniversary of the 1964 World’s Fair. The anniversary raises considerations regarding the preservation of what remains of the Fair in Flushing Meadows-Corona Park as well as a demographic retrospective. It was the World’s Fair which contributed to Asians settling in Flushing, another layer to the immigration story.

So what should be done? Well, the answer is the same as it was for Brooklyn and the Bronx only with a change of names. Queens Borough President Melinda Katz should convene a meeting of the Queens history community with the Queens Borough Historian, Queens Historical Society, Queens Museum, Queens Library, and Queens College. The agenda items of the meeting should include planning for:

1. Having an annual Queens History Conference where all history organizations can have display tables

3. Including Queens history and civics with field trips in the Common Core Curriculum

4. Designing Queens Paths through History for the different neighborhoods and themes of the borough’s past for residents, students, and tourists.

These are questions which need to be answered in Queens.