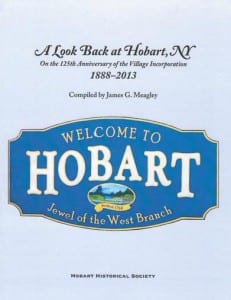 The Hobart Historical Society in the Village of Hobart, Delaware County, New York has recently published a new book about the history of the Village. It is the most useful local history book published in New York State that has ever come across the desk of The New York History Blog, and It should serve as a model for historic preservationists and other historians of smaller communities and neighborhoods.

A Look Back at Hobart, NY – On the 125th Anniversary of the Village Incorporation – 1888-2013 was compiled during the past two years by James G. Meagley, who grew up in the Village. The book has 372 pages, with 650 photos, including a photo of every building currently in the Village and is a significant update and expansion of A Century of Hobart 1888-1988, published twenty-five years ago. Gerald Stoner and his wife, Ellen, of Stamford, NY, assisted with the layout and publishing of the new book.

The book is divided into three parts. Part I reviews the early settlement of the Village and the development of some key institutions (such as post office, churches, schools and cemetery).

Part II contains a complete review of every land parcel in the Village, with a history of the ownership of the land and buildings back to the 1780s and with many old vintage photos of various buildings, many of which no longer exist. Part II also goes street by street through the Village, providing a walking tour of each street and the history of each property, including references from excerpts of two maps of each street (1869 and 1988).

The Delaware County Historical Association recognized the book by awarding one of its annual merit awards in 2013 to James G. Meagley and the Hobart Historical Society.

To date, more than 300 copies of the book have been sold. The book is available in both hardcover and softcover editions, and may be purchased from the Hobart Historical Society, from one of the local bookstores in the Village of Hobart, or from the website of the publisher Publishers’ Graphics.