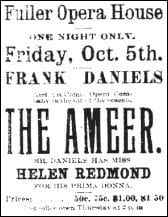 Helen Redmond’s life was that of a star, playing Broadway and touring the country for five years in the role of prima donna, but she hadn’t forgotten her family. In 1900, Helen’s mother, three brothers, a sister, and a nephew shared a Manhattan address with her. All were employed except for mom (age 64 and retired) and the nephew, who was in school. It was a far cry from 20 years earlier, when the single mother of seven toiled as a hotel servant and cook in upstate Vermont.

Clinging to her roots, and to escape the constant limelight and media attention, Helen occasionally visited her hometown of Port Henry, sometimes spending entire summers there, accompanied by her mother.

In 1900, the hit British musical Florodora came across the pond to Broadway, where it enjoyed even greater success. Among the players, and eventually a star of the show, was Helen Redmond in the role of Dolores. In the audience for virtually every performance was a Philadelphia physician, Dr. Frederick Kalteyer, who was smitten after watching Helen act and hearing her sing. The two became very good friends. Their relationship was later described by the New York Times as “one of the most romantic courtships of the stage.”

During her prima-donna role in a Philadelphia performance of The Silver Slipper, Helen fainted. “Is there a doctor in the house?” went out the common cry, and it was Dr. Kalteyer who responded from the audience. After tending to her in the dressing room, he proposed marriage. She turned him down, but Kalteyer stayed the course, and in early 1904, after a lengthy romance, they were finally wed.

Helen’s part in Florodora was considered by many as her greatest role. When she performed before an admiring crowd in 1902, one reviewer wrote, “Helen Redmond was just in her element as Dolores, and in her solo in the second act, she gave the finest interpretation of the song Boston has ever heard, receiving several recalls.” Her talents were no doubt compelling. In late 1903, emerging from a Broadway performance, Redmond was greeted by a brand new car, courtesy of a secret admirer. She requested that the chauffeur return it to its owner.

There were no signs that her brilliant stardom would fade anytime soon. Helen was still at the height of popularity when she married, enjoying great reviews for her lead role in Winsome Winnie. It was rumored she would soon be elevated to the status of stage superstar. But within weeks of her marriage to Dr. Kalteyer came the announcement that Redmond was retiring.

It was stunning, to say the least, but it was true, and Helen’s name was soon absent from the headlines. Finally, in 1907, after more than three years away from singing and acting, she attempted a comeback, appearing in several shows. But did she still have it after sitting idle all that time?

The critics certainly thought so. Variety: “She was given a warm welcome. She still sings sweetly and her beauty is retained.” Billboard: “She sang a number of solos and made a hit.” The Salt Lake Tribune:  “She is a great beauty and one of the most popular women who has ever sung in musical productions.”

Redmond continued to tour the country as a prima donna through the end of 1909, when she suddenly called it quits again, retiring at the age of 31. She and her 36-year-old husband were attended in their Philadelphia home by two servants (a maid and a cook), the very same jobs her mother had held when Helen was an infant. In 1910, Helen’s age in the census was given as 27, five years lower than the truth. Perhaps it was vanity, or maybe just a clerical error.

By some odd coincidence, the newest show launched at the time of her death was The Return of Helen Redmond. Despite the title, the show was unrelated to Helen or her career, but it’s a good bet that with such a great sense of humor familiar to so many, she would have laughed at the irony.