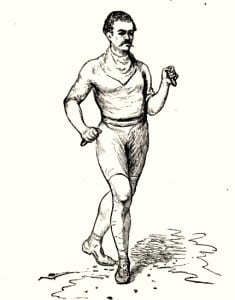 As sports-loving New Yorkers recover from the hoopla surrounding Sunday’s Super Bowl XLVIII, and prepare for the opening of the XXII Winter Olympic Games on Friday, cautionary words from 1869 are worth reviewing.

In a front page story entitled “The Abuse of Athletic Games” that appeared in the January 28, 1869 issue of the Malone Palladium, a doctor warned readers about the dangers of allowing children to overdo athletics—the “compound evil of our school system.” According to the doctor, because young bodies are “growing, unfinished and weak,” excessive athletic training will lead to one part of the body being developed at the expense of the other. He said, “either the joints, the lungs, the heart, or the spinal system suffer in the unequal struggle.”

The doctor put some of the blame for overdoing athletics in school on the “caprice” of coaches who he described as “physical sages, ignorant of physiology and hygiene.” However, he placed the major share of the blame on the “pest of our school system”—“misdirected emulation of the adult world.”

What sports were dazzling the adult world in 1869? Walking, rowing and baseball. The doctor wrote, “He who walks, must walk for a wager, he who rows, must row for a prize, he who plays baseball, must dislocate his fingers or break his nose in the false ambition to outdo his antagonist.”

The sport of long distance walking or pedestrianism became prominent in America largely because of the feats of Edward Payson Weston. He first appeared on the sports scene in 1861 when he announced that he would walk from Boston to Washington, D.C. in ten days and attend Abraham Lincoln’s presidential inauguration. Newspapers hyped Weston’s walk, cheering spectators stood along his route, and gamblers took bets hand over fist on whether Weston would make the swearing-in ceremony in time. He arrived in Washington on March 4 at 4 pm, 208 hours after he had left Boston, but a few hours too late to see Lincoln sworn in as president.

Known in the sports news as “Weston, the pedestrian,” he gained more publicity for himself and the sport by accepting numerous walking challenges. In 1867, he walked 1326 miles from Portland, ME to Chicago in 26 days. The next year, he walked 100 miles in a little over 22 hours. Soon, pedestrian events were being held throughout the nation in halls where athletes would walk around a track for hours at a time to the cheers of tens of thousands of sports fans and gamblers. Weston became a star in the U.S. and Europe and his professional walking career stretched from 1861 to 1922.

Professional rowing was the second sport that prompted the doctor’s warning about the abuse of athletic games in 1869. Rowing races first began to gain prominence in American sports circles in the late 1850’s. Joshua Ward of Newburg, NY was one of the early rowing stars who competed for money and drew thousands of spectators and gamblers to the sport. He won a championship regatta in Boston on October 24, 1859 and continued winning professional matches throughout the 1860’s. 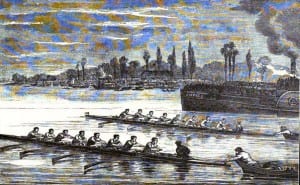 There were two major races in 1868. On June 24, John Tyler of Boston defeated Walter Brown, a native of Madison, NY, in a two-mile race on the Hudson River that finished across from the Elysian Fields in Hoboken, NJ. Tyler won a purse worth about $17,000 in today’s money.

The second major contest of the professional rowing season was a championship four-man crew race held on October 22, 1868 on the Connecticut River across from Springfield, MA. The four Ward brothers from Newburg, NY competed in a six-mile race against a crew from St. Johns, New Brunswick, Canada for a purse worth about $50,000 in today’s money. Before a huge crowd which had surged into Springfield from all across New England, Philadelphia and New York, the Canadians easily defeated the Ward brothers by about one minute or 50 lengths.

The third adult sport that stimulated “misdirected emulation” by youngsters in 1869 according to the doctor, was baseball. The game’s popularity in New York State had mushroomed after the Civil War. It seemed as though almost every community of any size had at least one baseball team it could call its own. Some of the most well-known teams in 1868 included: the Buffalo Niagaras, Brooklyn Atlantics, Syracuse Central City Club, Lansingburgh Haymakers, Albany Nationals, and the New York Mutuals. In addition to individual games, sports fans in 1868 thronged to baseball tournaments that were held in all corners of the Empire State. Among the most publicized that year were those in Niagara Falls, Rochester, Albany, Troy, New York City and Brooklyn.

Perhaps the biggest baseball news of 1868 was a story in September that the Cincinnati Red Stockings planned to come east and would play New York State teams on their tour. A year later, according to most baseball historians, the Red Stockings would become the nation’s first fully professional baseball team when its management paid a salary to each of the ten men on the team for eight months from March 15 to November 15.

In his article about the abuse of athletics, the doctor made it clear he was not opposed to “reasonable athletic activity.” However, he warned young athletes not to make athletics “the business of life.” He urged them to cultivate both their bodies and their minds. He said, “If you overdevelop one, you will seriously dwarf the other. Intellectual culture alone will make you a nervous, unbalanced, precocious man. Physical culture alone will make you strong as a hod carrier—and as dull.”