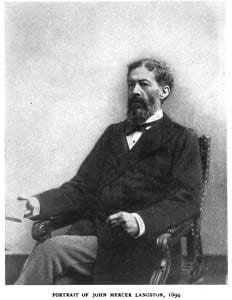 Contrary to the normal practice, at that time, of lawyers being trained by “reading law,” Fowler’s school offered courses in extemporaneous speaking and debating, and utilized mock trials to allow students to hone their courtroom skills. The school received much positive attention from the legal community, including South Carolina’s John C. Calhoun.

One person who learned of it was John Mercer Langston from Ohio. Langston had been born a slave in Virginia: his white father had owned his mother, who was of mixed race. The father, however, was proud of Langston and his other sons, and provided for their education and liberation. He moved the family to Ohio, where, after the father’s death, Langston lived with a guardian. When the guardian (with no bad motives, according to Langston) wanted to take his ten-year-old ward to Missouri to live, the move was prevented when Langston’s brothers took the matter to court. Langston remained in Ohio, where he successfully completed his basic education.

Langston decided he would like to become a lawyer, though there were not, nor had there been, any practicing black attorneys in the U.S.  As Langston wrote in his autobiography, From the Virginia Plantation to the National Capitol, or the First and Only Negro Representative in Congress from the Old Dominion, he “was invited to this calling by no prospect of success, by no example of a daring and courageous forerunner.”

A friend of Langston’s, Thomas Higgins (later a colonel in the Civil War), was a student at Fowler’s school, and recommended it to him. Langston wrote to Fowler, advising him of his abilities as a scholar, his race, and that he was very keen to attend his institution. Fowler submitted the matter to his trustees and faculty, who felt that it would be too disruptive to have a student of color. 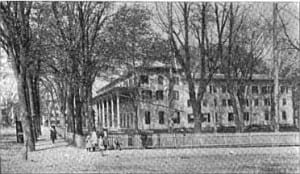 Fowler, who seems not to have been particularly prejudiced himself, notified Langston of his rejection, but suggested that he come to Ballston Spa, hoping that when he made a personal appearance, the outcome would be different. Langston made the trip in 1850, but unfortunately the school’s trustees and faculty would not reverse their decision. Fowler told Langston that John C. Calhoun had visited the school the previous year, and had promised to send him many students from South Carolina. Taking on a black student might affect Calhoun’s willingness to help the school.

Langston was crestfallen, but Fowler then suggested two schemes. “I will let you edge your way into my school.” Or, if Langston would pretend to be French or Spanish, hailing from the Caribbean, or Central or South America, he would allow him to enroll.

The prospective student asked Fowler to clarify what he meant by “edge your way,” and was told he could go to class, sit apart from the other students, ask no questions, and behave quietly. If no one objected, he could move nearer the rest of the class and keep moving closer until he became a normal student.

Langston found both options humiliating, and neither was agreeable to him. He told Fowler: “I am a colored American; and I shall not prove false to myself, nor neglect the obligation I owe to the negro race!”

The matter was settled, but Fowler kindly invited Langston to give a  lecture at the school. He changed his mind, however, when Langston said that his topic would be how a promising black student had been kept out of a prominent law school.

The day following this exchange, Dr. St. John (probably Ballston Spa resident Eliphalet St. John) invited Langston to attend a dinner at his home;  Fowler and several of the law school faculty also were present. St. John, assuming that his young friend would be attending the law school, welcomed him to the community. Langston explained that he would be returning to Ohio and referred St. John to Fowler for the reason. Pressed for an answer, Fowler came clean to St. John, who excoriated him in front of all the dinner guests.

The next day a local attorney (Langston does not give his name) offered to take him into his office to study law, but Langston instead returned to Ohio. He studied at Oberlin College, and applied to an Ohio law school, and was rejected there as well, so ended up studying law under the auspices of attorney Philemon Bliss. He reportedly was only the second African American to practice law in the nation, gaining his certificate in 1854.

Langston practiced law for a number of years. Perhaps his most famous case was his successful defense of Mary Edmonia Lewis (later a well-known sculptress), a woman of black and Native American ancestry, who was tried in 1862 for allegedly poisoning some fellow Oberlin College students.

Langston’s later achievements included working for the Bureau of Refugees, Freedmen and Abandoned Lands; his appointment as ambassador to Haiti; being elected to Congress; teaching law at Howard University; and running a school in Petersburg, Virginia.

He apparently did not bear a grudge against the Ballston Spa area for having been rejected as a law student. In 1876, he addressed a political meeting in nearby Saratoga Springs, and the entire text of his speech  (in support of the Republican Party) was printed in the Saratogian newspaper on August 2, 1876.

Though there were some citizens who were anxious to usher Langston into the Ballston Spa community, fear and discrimination won out, and New York’s chance to play a role in the training of this illustrious and proud African American was lost.