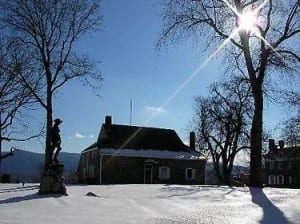 This award is given each year in honor of Martha Washington, a perennially outstanding woman in history who resided in the Hudson Valley with her husband, General George Washington, during the last days of the Revolutionary War.

In addition, Kathleen Mitchell will receive the Martha Washington Woman of History Founder’s Award. This special award celebrates the creation of the annual acknowledgement of some of the region’s inspirational women. The presentation of this award will take place on April 6th at the Ritz Theatre, during Washington’s Headquarters tribute program to Martha Washington, The General’s Lady. The public is welcome to attend the program, starting at 2:00 PM.

Mary Sudman Donovan, with a Doctorate in History from Columbia University, is a published author, civic leader, lecturer and university professor. She has taught American and World History at Hunter College CUNY, been the president of the Dobbs Ferry Historical Society for almost a decade, and been involved with many popular community events. Her published works include, George Washington At ‘Headquarters, Dobbs Ferry’, The Thirteen Colonies Cookbook, and articles in the quarterly newsletter The Ferryman.

This year, Kathleen Mitchell, former Interpretive Programs Assistant at Washington’s Headquarters, and originator of the Martha Washington Woman of History Award, in 2002, will be honored during the General’s Lady program. Mrs. Mitchell, a former nurse with an interest in history, moved to the Hudson Valley from her native Pennsylvania and set about learning the history of the area. As a historic interpreter at Washington’s Headquarters her interest in Martha Washington flourished, making it her goal to bring greater attention to the important role Martha played during the Revolutionary War and the further history of the country.

Admission to this event is free to the public.Washington’s Headquarters State Historic Site is a registered national historic landmark. It is located at the corner of Liberty and Washington Streets within the city of Newburgh’s East End Historic District. For more information, please call (845) 562-1195.