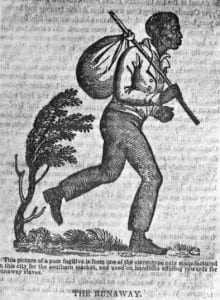 Residents of antebellum New York State assumed a large responsibility for sheltering slaves fleeing to Canada. It’s rare that we hear how families dealt with the challenge of concealing a fugitive, a crime for which they could pay high fines or even jail terms. The following account of Martha and David Wright’s experience reveals some of the complications involved when a family with young children offered lodging to runaways.

Martha and David Wright offered their Auburn, New York home as a station on the Underground Railroad from its early years. In letters to her sister, Lucretia Mott, Martha described the stories and challenges that boarding fugitive slaves presented to her and her family. One of those stories happened in January, 1843.

Having heard through the Underground Railroad that the Wrights would protect runaway slaves, a slave came to their back door as the sun was setting. He showed Martha a note that read, “To the ‘spiritually minded’ recommending a runaway slave to the care of whom it may concern.” David was not yet home from his law office, but Martha admitted the slave into her kitchen. He arrived after the four children had left the kitchen for the evening. Martha talked with him a bit while he ate the supper she served him.

He then departed from her home, promised to return, and did so about nine that evening. Martha told her children about his presence, but forbade them from entering the kitchen. When the slave returned, she offered a chair by the stove, where he sat reading alone until David Wright returned from work. The slave told David he was from Baltimore. Martha offered him her settee for the night and covered him with an old cloak of David’s because she “didn’t fancy having him go upstairs.” David showed the slave how to put wood in the furnace to keep it running and gave him 50 cents (about $10 in today’s money) to help pay for part of his ride north the next day. David and Martha fastened the door at the head of the kitchen stair and left their guest alone for the night.

Early the next morning David met the slave in the kitchen, eager to be off before it was very light. He gave him bread and butter for his journey. Martha came down and presented him with a couple of shirts she had tied up. The couple bade their illegal guest goodbye before the children or daylight appeared. Their eleven-year-old son Tallman rose early to have “some interesting conversation with him about the land of chains.” He was much disappointed to find that the slave had already left.

Tallman had his breakfast and prepared to depart the house on an errand to the Post Office. He could not find his scarf, which he knew he had hung in the kitchen with his cap. Martha told Lucretia that she and David assumed that the slave had taken Tallman’s scarf when he left. They did not say this to their unsuspecting son, because “it would give such a shock to his philanthropy.”

Their daughter Eliza, two years older than Tallman, did not enter the kitchen until she was sure the slave had left. She was more terrified than curious about the harbored slave. Martha told Lucretia, “she was as afraid as could be of him and hardly dared to go to bed.” Eliza was so scared that she “dared not stay in the house if another came.”

Eliza was not alone in her disquiet. David was discouraged by the slave because of the robbery, which turned him “sour.” Martha suspected that had the slave asked for the scarf, David would have willingly given it to him. The incident made him less enthusiastic to shelter slaves. He told Martha that if the slave’s master had come looking for him he would not defend the slave. When Eliza recalled this incident in her memoir much later, she remembered it as pivotal to her father’s feelings about fugitive slaves. Because he held to a “strict code of behavior,” he expected others to do the same. He could not tolerate the theft of the scarf.

It is not clear that the Wrights ended their direct participation in the Underground Railroad from this point. What we do know is that David “gave Martha firm lawyerly advice not to detail their illegal activities in family letters.” The lengthy missives that Martha and Lucretia wrote their families were legend. They traveled from relative to relative, each adding their news. Widely circulated, David feared that they might fall into hands outside the family. After January 1843, the Wrights included no more descriptions of aiding slaves.

Eliza’s memoir lends more insight to the impact of this illegal action on the family. Not only was she scared when slaves stayed in her kitchen, the thirteen-year-old girl felt snubbed by her neighbors. “I don’t suppose any of you have any idea of the feelings of one who is ostracized on account of daring to believe differently for the majority,” she wrote. While it “wasn’t a pleasant experience” for Eliza, the community’s disapproval gravely disappointed Martha. Eliza believed although her mother “went her dignified quiet way, seemingly quite unaffected by any criticism,” she held a “trace of bitterness.”

Martha might have closed her home to fugitives after 1843, but she aided others who gave refuge to slaves. She became close friends with Harriet Tubman, her neighbor and a strident slave rescuer. In a letter to her daughter Ellen just before the Civil War began, Martha reported, “We have been expending our sympathies, as well as congratulations, on seven newly arrived slaves that Harriet Tubman has just pioneered safely from the Southern part of Maryland.” One woman had carried a baby all the way, and brought two other children that Harriet and the men helped along.

Martha continued, “They brought a piece of old comfort and blanket, in a basket with a little kindling, a little bread for the baby with some laudanum, to keep it from crying during the day. They walked all night, carrying the little ones, and spread the old comfort on the frozen ground, in some dense thicket, where they all hid, while Harriet went out foraging and sometimes could not get back till dark, fearing she would be followed. Then if they had crept further in, and she couldn’t find them, she would whistle or sing certain hymns, and they would answer.”

This group was the last that Harriet Tubman guided north and probably the final opportunity for Martha to help slaves directly. Soon her efforts would extend to the freed blacks whom Harriet housed during and after the Civil War. More at ease with this legal charitable activity than she had been as a child in fear of fugitives, Eliza joined her mother in assisting Harriet, who offered her Auburn house as a haven for many years.

Whether slaves were in their kitchen or in their hearts, Martha and David Wright thought slavery was the most important issue of their day. From 1833, when they had joined William Lloyd Garrison’s American Antislavery Society, they had avidly supported his efforts. As committed abolitionists, they read his newspaper,  The Liberator, and many other antislavery publications. To Martha, one’s “life is in the right” only if one was openly opposed to slavery.

The Wright family found ways they could support African Americans, both enslaved and freed.  Their zeal and respect for each others’ individual needs in this endeavor are a fitting testament to those who try to determine how best to serve our neighbors and how best to mark African American history month in our busy lives.