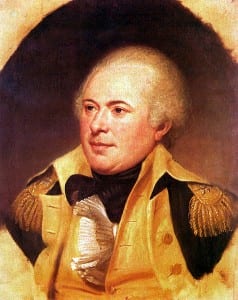 General James Wilkinson was the 5th Commanding General of the US Army, fought along the St. Lawrence River during the War of 1812, and was a spy for the Spanish. Find out more about this colorful character when Matt Dudley presents For King and Countries: The Remarkable Life of an Occasional Spaniard and a Fair-weather Patriot on Saturday, March 1st, 2 p.m. at the St. Lawrence County Historical Association at the Silas Wright House, 3 East Main St., Canton.

Matt Dudley is a Senior History Major at St. Lawrence University and a native of Cazenovia, NY. He began studying General James Wilkinson’s career in the Fall of 2011, focusing mainly on Wilkinson’s 1813-1814 winter campaign in the North Country. This past summer, thanks to funding from St. Lawrence University, Matt furthered his investigation of Wilkinson’s life in the General Archive of the Indies in Seville, Spain and at the Chicago History Museum.

Wilkinson’s adventures ranged from Mexico City to Braintree, from Havana to Quebec City. The sources uncovered by Dudley in Seville and Chicago shed new light on Wilkinson’s service to not only the United States and Spain, but also the revolutionary governments of Mexico. On March 1st, Dudley will focus on these new sources in particular in an effort to deepen our understanding of how James Wilkinson became an occasional Spaniard and a Fair-weather Patriot in service to the United States and Mexico.