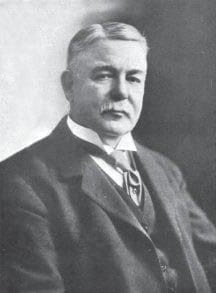 When newspapers ruled, editors wielded great power and thus bore great responsibility. Ethics were critical but weren’t always adhered to. It took men of courage to do what was right, and among the best of them was Chester Sanders Lord, a man with roots firmly embedded in northern New York State.

Lord was born on March 18, 1850, in the Finger Lakes village of Romulus. Before year’s end, the family had moved to Fulton, about ten miles south of Oswego. Fourteen years later, they moved to Adams in Jefferson County, where Chester attended the Adams Institute. He later attended Fairfield Academy, north of Utica. Life in these rural locations established Chester’s lifelong affinity for fishing and hunting.

He attended Hamilton College and went to work for the Oswego Daily Advertiser (it later became the Oswego Times), which counted F. H. Purdy among its owners. In 1871, on a trip to New York City, Purdy visited some old friends at The Sun. During their conversation, he mentioned an outstanding newspaperman and current editor in Oswego, Chester Lord. In short order, Lord was contacted by The Sun and offered a job, which he accepted in 1872.

Chester put his skills to work in the big city, and no matter what the subject was, he managed to make his articles interesting to readers. He was variously described as honest, social, insightful, and industrious―in other words, well equipped for the job at hand. The famed owner of The Sun, Charles Dana, was impressed. Lord climbed the ladder for a decade, and in 1882 he was named managing editor.

During Lord’s 32 years at the helm of The Sun, he maintained his integrity, focusing on quality reporting and excellent writing. Among The Sun’s competitors were the newspapers of William Randolph Hearst and Joseph Pulitzer. Their primary goal was increased circulation, which they successfully achieved through wild headlines, speculative stories, and fewer fact checks, a system that became known as yellow journalism. Parallels can be found everywhere in today’s jaundiced media.

Lord was known to all as a serious journalist who only ran with a story when he knew it was right. To that end, he built a web of fully trusted reporters, leading to the catch-phrase, “If You See It in The Sun, It’s So.” Hearst and Pulitzer had larger circulations, but The Sun made honest journalism its priority.

Several major stories over the years affirmed The Sun’s sincerity. During the Russian-Japanese War, great emphasis was placed on the stronghold known as Port Arthur. In the race to be first, several papers prematurely reported its fall on four different occasions, but The Sun remained silent throughout. Finally, when Lord’s trusted reporter, John Swift, wired four simple words―“Port Arthur fallen: Swift”―The Sun ran with the story, beating its competitors to the truth.

Lord’s chain of accurate reporters led to The Sun’s reputation as the definitive source for election returns. In 1884, in the post-Election Day issue of The Sun, Chester declared Grover Cleveland the winner―the only newspaper to do so. And eight years later, when Cleveland unseated the incumbent president (Benjamin Harrison), Cleveland’s chief of staff first learned the news from Lord.

In 1912, when Woodrow Wilson was elected, The Sun reported that William Jennings Bryan would be named secretary of state, a claim that was ridiculed by many major newspapers and dismissed as impossible. The source of the story was E. A. Fowler, who had once been a Sun man. Lord’s unwavering trust in him was affirmed with Bryans’ appointment.

Chester stood by a belief in ethics as well. When a competitor published startling details on a big story, Lord asked his own reporter why the same facts hadn’t appeared in his report. The answer: “We both gave our word that we would keep back that piece of news for three days.” The Sun man had remained true to his word at the expense of being scooped. Lord’s reply: “Son, you are a great man!”

Another situation during an investigation of life insurance companies revealed that Lord’s rules and practices were part and parcel of The Sun’s operations. An investigator told a Sun reporter that a document in the committee meeting room could probably be secured by giving a cleaning lady $5. He knew the rules, but the report was critical, so he called his Sun editor, asking what would happen if he took the opportunity. The answer: “A Sun man who would do that would lose his job.”

Lord was widely known for genius in hiring. Many top reporters worked for The Sun, and some remained for long tenures. His network of top-grade correspondents led to the establishment of the Laffan Bureau (named after Publisher William Laffan) in the mid-1890s, a news-gathering organization that rivaled the Associated Press.