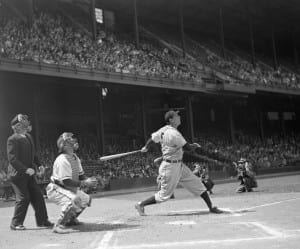 There are people whose contributions to baseball history went far beyond mere batting averages or stolen bases. They didn’t just play the game, they changed the game. For generations of American Jews and other minorities, they served as athletic, cultural, and ethical role models.

On March 13, 2014 the National Museum of American Jewish History will open a new exhibition, Chasing Dreams: Baseball and Becoming American, being billed as “the first large-scale exhibition to use the story of Jews and baseball as an opportunity to highlight ways in which our national pastime is part of the history, and ongoing story, of how immigrants and minorities of many different backgrounds—including Italians, Asians, Latinos, African-Americans, and many others—become American, to feel a part of the society in which they might otherwise be on the margins.”

The exhibition is co-curated by Dr. Josh Perelman, chief curator and director of collections and exhibitions at National Museum of American Jewish History, and Ivy Weingram, associate curator. It will be on view at the Museum through October 26, 2014.