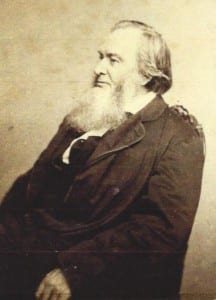 Born in Utica March 6, 1797, Smith came to Peterboro when nine years old and, with the exception of his years at college and in Congress, spent his life in Peterboro managing his land business in order to support his reform initiatives. Smith’s influence connected Peterboro to national issues.

At 2 p.m. Gerrit Smith biographer Norman K. Dann will describe the 1864 activities of abolitionist Gerrit Smith, his family, and his community as they relate to the nation at that time. Dann’s scene setting for 1864 will introduce the Sesquicentennial programs planned in Peterboro in 2014. The program will include Smith’s monetary commitment to the Civil War effort, the donation of his copy of Lincoln’s draft of the Emancipation Proclamation, his role in the development of Lincoln’s Republican Party, his reactions to the Election of 1864, and the letters from his son Greene written immediately after the Battle of the Crater during the Siege of Petersburg.

Jacob Donovan-Colin, Secretary of the Smithfield Community Association (SCA), will briefly explain the focus and direction of the Association, and recent improvements at the Smithfield Community Center at which the program will be held (5255 Pleasant Valley Road, Peterboro, NY), The Stewards will serve refreshments at the closure of the afternoon program. For more information: visit www.gerritsmith.org, e-mail info@gerritsmith.org, or call 315-280-8828.