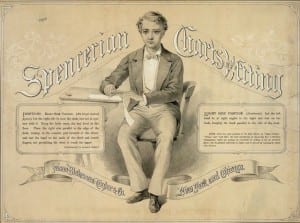 Students were expected to provide their own foolscap paper, “good” ink, and pens. Tobin’s ad stated that specimens of his penmanship could be seen at the post office and that he would award a gold pen to the student who showed the most improvement. His fee for twelve lessons in today’s money was about $35.00, payable in advance.

The Spencerian method of handwriting had been developed and promoted by Platt Rogers Spencer. Born on a farm in East Fishkill, NY, in Dutchess County, in 1801, he and his family subsequently moved to Ohio where, as a 14-year-old pupil, he taught his first writing class in a one-room log schoolhouse. Spencer’s first penmanship instruction book was published in 1848 and was revised many times before and after he died in 1864.

Because his goal was to create a handwriting system that could be written quicker than competing systems, he named his process “chirythmography,” a word he created from Greek words meaning “timed hand writing.” Spencer recommended that a metronome be used to help students keep up the pace during writing practice. Although the letters in Spencer’s system were very ornate by today’s standards, they were simpler compared to those of earlier centuries. He said the shape of his letters was influenced by the elliptical curves he saw everywhere in nature.

Around the turn of the century, the march of technology brought an end to the dominance of the Spencerian method. Critics in the business world had been complaining for years that telegraphers were unable to translate Morse code into Spencerian handwriting fast enough. In response to such criticism, another man born in New York State, Austin N. Palmer, developed a new system of handwriting that he claimed generated “commercial speed”—a kind of handwriting that worked hand in glove with the new communications technology which had grown to include the typewriter, the multigraph, the mimeograph, the addressograph, and the telephone.

Born in Fort Jackson, NY, in St. Lawrence County, in 1859, Palmer studied the Spencerian system at Bryant and Stratton Business College in Manchester, NH before moving west. Eventually settling in Cedar Rapids, Iowa, Palmer devised a method of handwriting which also became known as “muscular writing” because it brought the muscles of the entire arm into play, not just the muscles of the hand as Spencer’s system did. Critics of the Spencerian method complained that it turned out nicely shaded and formed letters but the writer “lacked the speed which is essential in the practical world.” According to Palmer, pupils learning Spencer’s method were advised that it was “not how much but how well” they wrote, speed was entirely overlooked. Palmer added that the “copybook method,” his way of referring to Spencerian handwriting, was “a system of drawing which crippled individuality, hampered freedom of movement, and has developed millions of scribblers.”

Palmer extensively promoted his textbooks and their sales got a huge boost when the associate superintendent of schools in New York City saw and liked samples of Palmer’s method in 1904. The Palmer system soon supplanted the Spencerian method and dominated penmanship instruction in America well into the 1950’s. Since then, Palmer’s method has been deposed by the Zaner-Bloser method and the D’Nealian method which are the main styles of handwriting taught to children today.

However, there are a growing number of people today who are questioning whether any method of cursive handwriting should be taught in schools. The Common Core State Standards do not require students to learn cursive. Those who argue that this skill should not be taught point out that cursive is dying out by itself. They say that Americans use keyboards and print handwriting to do most of their written communication today. Most of these critics agree that some kind of print handwriting should be taught but not cursive. According to these critics, cursive should meet the same fate as the spinning wheel, the goose quill pen, the abacus and the slide rule.

As this debate heats up and the possibility that cursive handwriting will disappear entirely from the public scene grows, the promise made by Professor Tobin in his 1869 ad that he would give a gold pen to the student who showed the most improvement is quaint and bittersweet.