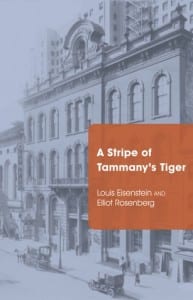 In A Stripe of Tammany’s Tiger (Cornell University Press, 1966, 2013 Reprint), Louis Eisenstein, a Tammany precinct captain from Manhattan’s Lower East Side, sets out with his coauthor Elliot Rosenberg to chronicle the evolution—or rather devolution—of New York City politics through the first seven decades of the twentieth century.

Eisenstein imbues his lively narrative with an overarching theme: that personal interactions and good faith between those at all levels of power are of paramount importance both for sustained political success and for competent municipal administration.

“This book is a highly personal glimpse into the world of precinct, district, and county politics,” the authors wrote. “It deals with several stripes of the Tammany Tiger and brings into close focus some of the most forceful background figures in New York City’s political framework. Primarily, it is a forty-year panorama of Tammany practices and personalities.”

Louis Esenstein, a World War One US Navy veteran, worked for the post office, the IRS, the New York City Department of Finance, and the New York State Senate. He was a Tammany Hall precinct captain from the 1920s through the 1950s. Elliot Rosenberg, his nephew, was a high school teacher in New York City for thirty years.