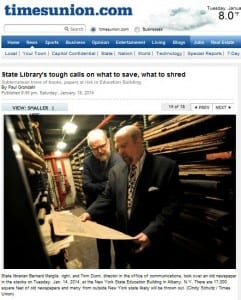 Paul Grondahl at the Albany Times Union is reporting that the New York State Library is rapidly discarding tens of thousands of items in the stacks of the old State Library beneath the State Education Building.

State Librarian Bernard Margolis, who is overseeing the reduction of the stacks, blames years of State Library budget cuts and an increase in state Education Department paperwork.  Opposition from State Library employees, who remain anonymous out of fear for their jobs, has gone unheeded.

Here are some of the details from Paul Grondahl:

The State Library, founded in 1818, moved the bulk of its 20 million books and printed items in 1978 into the newly built Cultural Education Center on Madison Avenue at the southern end of Empire State Plaza that houses the State Library, State Museum and State Archives. But acres of antiquarian books, old newspapers and arcane journals were left behind in the Education Building’s subterranean stacks….

Among the items headed to the trash bin is the entire collection of Braille books, and the college catalog collection.

The weightiest challenge is what to do with 17,000 square feet of old newspapers, including dozens from outside New York state. Many ceased publication long ago. There is the Washington Globe, a semiweekly from the 1830s, and the Washington National Observer from the 1850s. There are stacks of defunct papers from 19th-century Boston, including the New England Palladium, Boston Investigator, Boston Evening Gazette, New England Galaxy and Boston Pearl.

Limited storage and resources will result in jettisoning newspapers from outside the state if they are unable to find libraries or archives that will take them. Digitizing them is cost-prohibitive. Funding was discontinued in 2007 for the New York State Newspaper Project, which microfilmed more than 4.37 million pages from among 10,537 New York state newspapers during 20 years by State Library employees.

Head over to the Time Union to read the full story here.