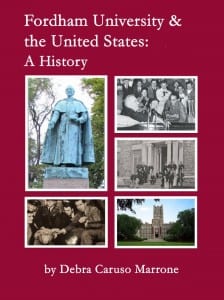 In Fordham University & the United States: A History (E-Lit Books, 2013), Debra Caruso Marrone delivers a breezy, informative book for American history lovers and anyone associated with the 172-year-old institution.

Founded as St. John’s College in 1841 by New York Archbishop John Hughes, the university began as a vehicle to educate young men and deliver Catholics to the upper class.

Caruso Marrone, a Fordham graduate and member of the alumni association’s Board of Directors, documents the life of the university, intertwining university events and the students and faculty members who made their mark on the nation. She writes about national figures who impacted the institution, once a stomping ground for U.S. presidents, war heroes and leaders in all fields. The book contains the story of Fordham’s rebirth, alongside that of the Bronx, under its three most recent presidents.

A fundraiser for Fordham students via the Fordham College Alumni Association, the book will also be of interest to those with ties to the Bronx.

Even those who know the basic history of Fordham – the playing days of legendary football coach Vince Lombardi, the university as home to the troops during both world wars and the years of unrest during Vietnam – will find new historical details.

The book also reveals information about the prejudice felt by Catholics before and after the turn of the last century, the reason a number of Popes during that era urged New York’s Catholic hierarchy to establish an upper class of its own. It details the evolution of Jesuit and Catholic higher education.

Seventy percent of all proceeds from Fordham University & the United States: A History are being donated to the Fordham College Alumni Association whose mission is to fund scholarships, fellowships and undergraduate research.

The book can be purchased on Amazon.com.