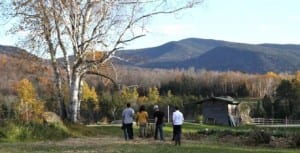 The lecture will begin at 7:00 pm with attendees encouraged to come for dinner at 6:00 pm. This opening program in the four-part series is titled “The Ghosts of Clinton County” presented by Gordie Little.

Gordie spent 36 years at radio station WIRY in Plattsburgh before leaving in 1997. In the early 1960s, he helped to establish a sister station WIRD in Lake Placid. After radio, he began writing a regular Sunday column called “Small Talk” in the Plattsburgh Press-Republican. He writes monthly articles for two magazines–“Strictly Business” and “Strictly Food For Thought.”

He does a weekly television documentary show entitled “Our Little Corner” with Calvin Castine for Hometown Cable. It is available online at hometowncablenetwork.com and on the region’s cable systems.

He collects, writes and tells “true” ghost stories. His book, “Ghosts of Clinton County,” continues to sell well and a sequel is scheduled for publication in 2014. He writes popular children’s books and his first, “Little Champy Goes to School,” is also available locally. A charming story entitled “Sparkles & Shiner” was an area hit this Christmas and has also sold very well.

Gordie enjoys telling stories and reading at many venues. Telling ghost stories about this area is a great pleasure and he looks forward to his appearance in Lake Placid. He welcomes questions and comments from everyone and will have copies of his books for sale at that time.

The winter lecture series has been titled “Odds and Ends” in memory of Laura Viscome, a long- time supporter of the Historical Society. Laura’s weekly “Odds and Ends” column ran in the Lake Placid News for many years and was a great source of information of residents and visitors.

Lectures will be offered monthly, January through April, 2014. All programs offered in the Lake Placid-North Elba Historical Society’s “Odds and Ends” Winter Lecture Series are free and open to the public.

The series will continue at Howard Johnson’s Restaurant on Wednesday, February 26, 2014 with Mike Farrell, Director of the Uihlein Forest and Joe Orefice, Professor and owner of the North Branch Farm presenting a program entitled “Adirondack Living”.