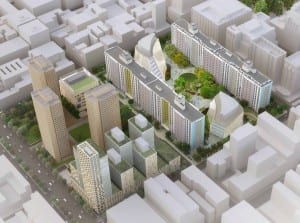 It is only possible to build on parkland in New York State with the approval of the State Legislature. The legal action opposing the expansion which Justice Mills ruled on was brought against the City of New York by a coalition of community groups, neighborhood residents and NYU faculty.

The New York City Historic Districts Council (HDC), a plaintiff on the lawsuit, welcomed the judge’s ruling, equating it with the spirit of community preservation pioneered by the legendary Jane Jacobs.  “Jane Jacobs managed to upend Moses’s decision to turn Washington Square Park into a thoroughfare and plow through Lower Manhattan and the judge is honoring her spirit,” said Simeon Bankoff, HDC’s executive director.

Henry J. Stern, a former parks commissioner added: “It’s nice when the community wins now and then to put the fear of God into the university so they can’t ignore the legitimate community interest. But if Moses couldn’t break the Village, why shouldn’t they run roughshod over N.Y.U.?”

The City has not yet formal responded to the ruling.